It all started in early 2015 when Schmidt received a phone call from Andreas Mogensen, the man who would become Denmark’s first person in space. They met in a coffeeshop in Schmidt’s hometown and Mogensen shared his dreams of being part of a space mission. And, in turn, he had a mission of his own for Schmidt.

“He asked me if it would be possible to make a Danish menu for the space mission,” recalls Schmidt. “I didn’t know much about the flight so I asked him when it was going to happen and he responded with 2 September. Okay, and how many guests are you expecting? Nine guests. Okay, dinner for nine in Earth orbit, half a year from now. No problem!”

And so they parted ways and Schmidt began working on the perfect menu. He was full of ideas - space is cold, so perhaps ice cream is in order! Then, just as he’d planned it all out, he began receiving emails from ESA detailing the rules that had to be followed for space meals. His plans had to change quickly and dinner for nine turned into dinner for 130 because of all the testing that ESA would have to do prior to sending it into space.

The food had to be able to last six months at 20C. “And in this process,” says Schmidt, “I got a call from ESA, saying ‘Hey, Thorsten, bear in mind....maybe it’s 25 degrees, not 20!” And to cap it all Mogensen had stressed one thing - no freeze drying. So it has to be real food. 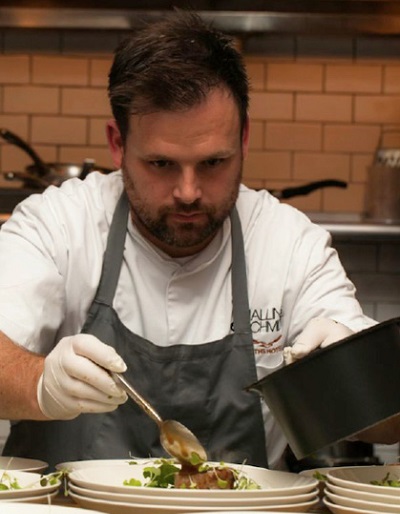 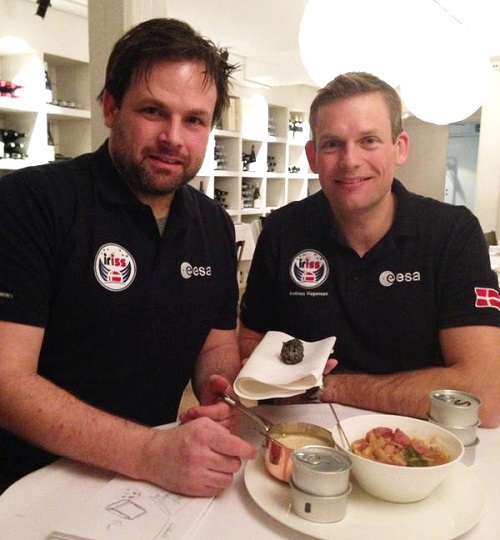 Of course, one of the biggest challenges for Schmidt was that the meal had to be eaten in zero gravity. And just as he was contemplating how he could possibly test the food’s viability for this unique environment without leaving Earth, he received another email. His deadline was now 7 April. So, in only a few weeks, dinner for nine in half a year turned into dinner for 130 in six weeks.

Unfaltering as ever, Schmidt decided to meet the guys from ESA and figure out what to do. Two space engineers visited him in Denmark for a coffee shop meeting to figure out a plan of action. Then, one of the engineers happened to mention he was creating an espresso machine for the ISS. “If you do an espresso machine,” responded Schmidt, “I’ll do sweets for the coffee.” And so, the first item on the menu had been decided - sweets for the coffee.

After that came further research. Schmidt received videos from ESA detailing everything about how astronauts live, work and function on the Space Station. He studied every video and the Internet, searching for things that could affect his menu. “I was watching an astronaut eating,” recalls Schmidt. “He was floating around and the food was flying around. My six-year-old daughter came to me and said, ‘is this the space food you have to do?’ And I replied, ‘Yeah, actually it is!’ And she looked at me and said, ‘That’s not possible!’ And then she went away. Thanks for your support, I thought. Though she came back when it was time to test the sweets for the coffee.”

Another problem Schmidt had to resolve in his quest for the perfect space meal was the fact that when astronauts arrive at the ISS, they lose their sense of smell and can therefore no longer detect flavour. “That’s probably not good for me, I thought! Because 80 per cent of your perception of taste is your smell, your flavour. People ask me why this happens with the smell. It’s called ‘fluid shift’ because of the way blood reacts in zero gravity. It creates pressure in your head, so you cannot smell.”

This latest challenge brought Schmidt back to his big passion in life - to why he became a chef and to the essence of why he loves being a chef. “It’s called gastrophysics,” he says. “Not astrophysics - ‘gastrophysics’?

So how does he define ‘gastropphysics’? “It’s the science of taste and well-being, both physically and mentally. It’s the way we interact with food, with each other and with our surroundings,” he states. “This is normally how I create dishes or small experiments in the restaurant - and it’s also how I solve tasks like this. There’s something called ‘umami’, it’s one of the main tastes. And the way it works is, you have receptors on your tongue and these can detect certain proteins broken down to amino acids, and when the receptors grab them they send a signal straight to the brain. Literally, like a sugar ‘reward’. And you’ll have a sensation of great taste, of a rich taste - and I knew this was something I had to base my ideas for the menu on.”

So what ended up being on the menu? The first course - designed to trigger as many receptors as possible - was salt-cured beef, specially prepared to keep its red colour (typically the curing process turns food grey and it becomes less pleasant to look at), with onions, cabbage and some special spices. 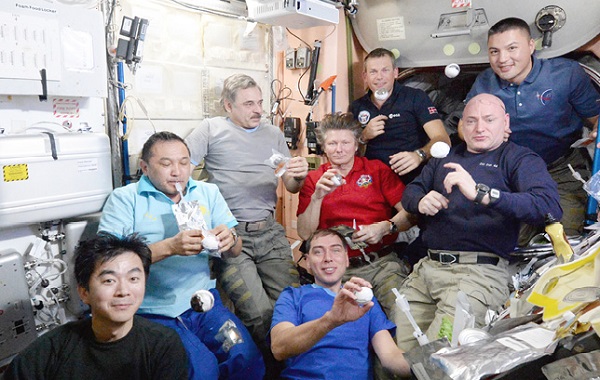 A big thank you to Thorsten Schmidt for a special Danish space dinner from the complete ISS crew - and a space rock surprise!

Next was cream caramel, rhubarb and lemon. And, finally, the sweets for coffee. “The sweets were designed with a dear friend of mine, who’s actually a world class chocolate master,” recalls Schmidt. “We came up with this idea to do a space rock because we wanted it to look like something from space.”

Then, just when it seemed that the biggest hurdles were overcome, Schmidt faced yet another challenge. In a email from ESA, he found out that the meal had to fit in a small box and weigh no more than 6.5 kg in total. Eventually Schmidt was able to overcome this final challenge as well and his delightful meal made it to the space station in Earth orbit.

Schmidt’s approach that food is much more than pure sustenance inspired him to send an extra special surprise to the ISS astronauts and he concluded his TEDxESA presentation with a heartwarming story of some very special space rocks.

“Food is much more than not being hungry,” he said. “Food also stimulates your senses, it’s part of being human. So, Andreas, in the beginning, said to me, ‘Can you do it like you do at the restaurant, have some surprise, something unexpected like you would in a gourmet restaurant?’ I said we could try but I really didn’t know if I could secretly send anything to the Space Station! So, together with my chocolatier, we came up with the idea of taking a space rock, a space rock made from this famous chocolate, and making the filling something special.

We asked ESA and Andreas to help us obtain handwritten notes from all the astronauts’ wives and loved ones which we folded up and put them inside the chocolates. We sent them away the first week of April and didn’t tell anyone. It was hard to keep that secret!”

Andreas later spoke about the moment when they all bit into the chocolate and saw the notes. At first the crew thought it was a fortune cookie. Then they took out the notes and, as they started reading, all went quiet as they recognised their loved ones’ handwriting.

So, sitting in the Space Station, in September 2015, the crew enjoyed not only a very special meal but also creatively delivered handwritten notes. “We had created this special moment and such special moments are very important to us,” said Schmidt.

“Try to imagine yourself being in a rocket, going somewhere like Mars, where you don’t have the sunrise or the sunset, you don’t have seasons, you don’t even have the Earth outside your window - and you need reference points. By sharing food and sharing moments, we can create these social reference points that can always be remembered. And this is very important. When we travel further into space than we do at present it will not just be about surviving but ‘living’ too. 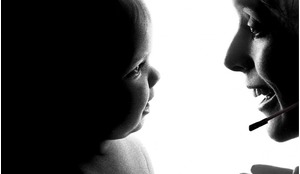 Human conception and childbirth in space