As Douglas Adams notes in The Hitchhikers Guide to the Galaxy, “Space is big. Really big.” Although humanity’s space aspirations may be great, most of our space activities in the short term are going to take place in the relatively tiny near-Earth region between low Earth orbit, from about 200 km, and geostationary orbit at 36,000 km. The geopolitics of space and spacepower are now the focus of much debate and, in this article, Angela Dennis compares the similarities and differences between the treatises of contemporary theorists Everett Dolman and Bleddyn Bowen. Is our space future one where one dominant state rules from the ‘ultimate high ground’ or will spacepower increasingly be distributed between and among states?

When Everett Dolman’s book Astropolitik was published in 2001, he was hailed as a possible successor to the great seapower theorist, Alfred Thayer Mahan. The book introduced a geopolitical approach to understanding space, presenting it not as a uniform vacuum, but as a distinct geography whose topography offered strategic advantages and disadvantages.

This year, Bleddyn Bowen’s book, War in Space similarly adopted a geopolitical approach and invited comparisons to Mahan. Bowen also drew on existing geostrategic theories of land and sea, and applied them to the geography of space. Yet, while Dolman’s theory presents a realist vision of space dominated by a single dominant power, Bowen offers a vastly different image of space as a more contested and contestable domain, playing an essential but supporting role in the messy business of Earth-based politics.

Dolman draws inspiration from the works of classic seapower theorists, and applies them to the space environment. Known as ‘bluewater’ theories, they draw heavily on the history of island powers such as Britain, that engaged with the seas in order to project power and deflect the power of others. 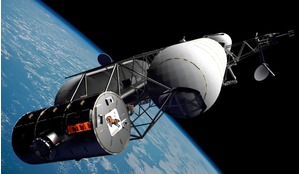