The exponential growth in debris and news of near-miss collisions in low Earth orbit are grabbing the headlines, but practical solutions to these challenges - either technical or political - are thin on the ground. Perhaps it is time to look earthward for inspiration? The authors consider the legacy of terrestrial energy industries and seek to answer the question whether any part of this experience can be transferred to the space environment.

Global space activity is already worth an estimated US$400 billion annually and this figure is set to increase dramatically as more companies take advantage of cheaper access to space and related developments in technology.

The corollary of this increase in commercial activity is a significant expansion in the number of satellites in orbit around Earth. Since 1957, almost 10,000 satellites have been launched, but this could pale into insignificance with the rise of the constellations: SpaceX’s Starlink, to name but one high profile constellation, may ultimately consist of more than 30,000 spacecraft.

Indeed, SpaceX is not alone in contemplating the use of large numbers of small satellites in low Earth orbit (LEO), with companies from around the world looking to use these so-called mega-constellations to provide enhanced communications and unprecedented internet connectivity across the planet. The potential developments are on a scale that will dwarf the existing population of space objects. 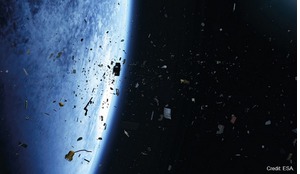