The Buchalter Cosmology Prize was established in 2014. It is an annual prize that seeks to stimulate ground-breaking theoretical, observational or experimental work in cosmology that has the potential to produce a breakthrough advance in our understanding. It was created to support the development of new theories, observations, or methods that can help illuminate the puzzle of cosmic expansion from first principles. The prize is awarded annually in January for the previous year. This year's award ceremony took place on January 6th at the 227th meeting of the American Astronomical Society in Kissimmee, Florida.

This year's winning paper, “Identification of a gravitational arrow of time” is from Perimeter postdoctoral fellow Flavio Mercati, who worked with Julian Barbour and Tim Koslowski to explore one of the most puzzling aspects of cosmology – the nature of time. The laws of physics do not generally make a distinction between past and future, but the universe seems to. Where does that difference come from? 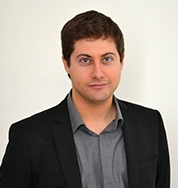 The researchers begin with an observation that the universe, as a whole, is a structure whose complexity is growing, with galaxy clusters, galaxies, and ultimately stars all emerging from an early amorphous soup of matter and energy. “Our conjecture is that our perception of time is the result of a law that determines an irreversible growth of complexity,” says Mercati.

This year's third-place winners are Perimeter postdoctoral fellow Elliot Nelson Perimeter Faculty member Niayesh Afshordi for their paper “Cosmological Non-Constant Problem: Cosmological bounds on TeV-scale physics and beyond”. Their work uncovers a new way in which cosmology can shed light on the future of particle physics.

In a set of novel calculations involving quantum fluctuations in the vacuum, Nelson and Afshordi set an upper limit on how energetic any unknown field could be before it caused the universe to curve in on itself. From this, they worked out that any undiscovered particle associated with an extension to the Standard Model of particle physics would have to have a mass less than 35 TeV.

Perimeter Institute is the world’s largest research hub devoted to theoretical physics. The independent Institute was founded in 1999 to foster breakthroughs in the fundamental understanding of our universe, from the smallest particles to the entire cosmos. Research at Perimeter is motivated by the understanding that fundamental science advances human knowledge and catalyzes innovation, and that today’s theoretical physics is tomorrow’s technology. This is the second year in a row that Perimeter researchers were awarded the Buchalter Cosmology Prize.