Found! The remains of India's Vikram Lander are identified

The remnants of India's Chandrayaan 2 Vikram lander, which crash landed on the Moon in September have been found.

The lander was targeted for a highland smooth plain about 600 kilometres from the south pole; unfortunately the Indian Space Research Organisation (ISRO) lost contact with their lander shortly before the scheduled touchdown.

Despite the loss, getting that close to the surface was an amazing achievement.

Since then, enthusiasts and professionals alike have been on the hunt for Vikram's remains. The Lunar Reconnaissance Orbiter Camera team released the first mosaic (acquired Sept. 17) of the site on Sept. 26 and many people have downloaded the mosaic to search for signs of the lost craft.

Shanmuga Subramanian, an Indian programmer who lives in Chennai, tipped off NASA when he noticed a new dot in an image from the LRO’s mapping camera that hinted this was debris from the unlucky lander.

Subramanian, who said he’s been interested in space exploration since childhood, deduced the Vikram lander’s flight path before landing from information gleaned from social media.


After receiving his tip, the LROC team confirmed the identification of the debris by comparing before and after images. According to the statement, the largest pieces of debris are each about 4.5 feet (1.5 meters) across. Vikram measured 2.5 metres (8.3 feet) in its longest dimension, according to materials released by India's space agency before the landing attempt.

Two subsequent image sequences were acquired on 14 and 15 October, and 11 November. The LROC team scoured the surrounding area in these new mosaics and found the impact site (70.8810°S, 22.7840°E, 834 m elevation) which showed the impact crater itself, dark ejecta rays and light lines marking the debris field.


The debris first located by Shanmuga is about 750 meters northwest of the main crash site and was a single bright pixel identification in that first mosaic (1.3 meter pixels, 84° incidence angle). The November mosaic shows best the impact crater, ray and extensive debris field. The three largest pieces of debris are each about 2x2 pixels and cast a one pixel shadow. 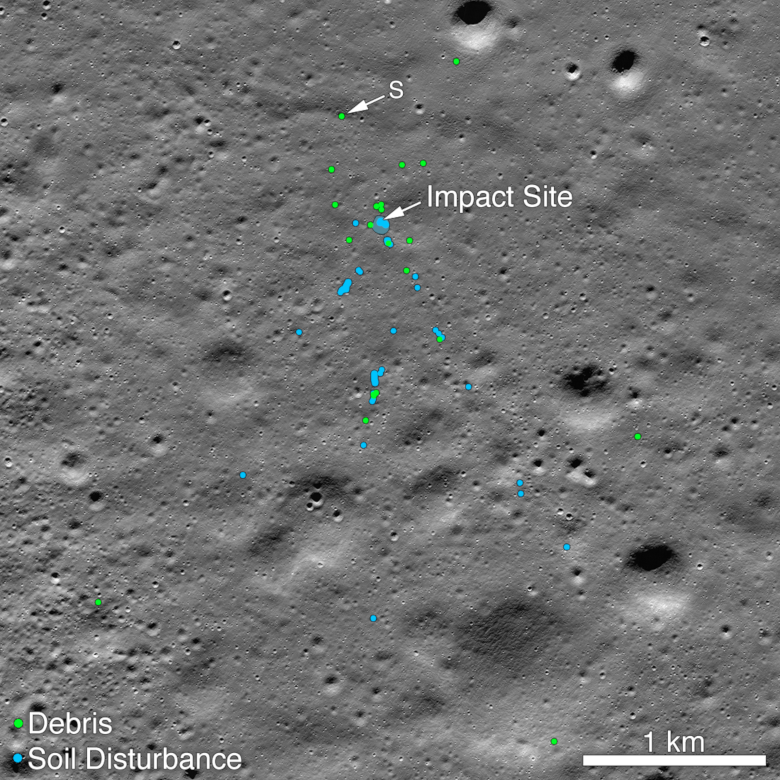