All systems go as ExoMars sends back its first image

One month a go, the ESA–Roscosmos ExoMars spacecraft departed this planet as it launched towards its final destination, the orbit of Mars. While the liftoff was successful, the ground team had to wait 12 hours for the first autonomous signal to confirm the mission was truly underway and underway it truly is, as the orbiter has just returned its first test image of a starry view taken en route to the Red Planet.

Since its launch, scientists and mission operators have been intensively checking the Schiaparelli entry, descent, and landing demonstrator and the Trace Gas Orbiter (TGO) to ensure they will be ready for when the spacecraft arrives at Mars in October.

“All systems have been activated and checked out, including power, communications, startrackers, guidance and navigation, all payloads and Schiaparelli, while the flight control team have become more comfortable operating this new and sophisticated spacecraft,” says Peter Schmitz, ESA’s Spacecraft Operations Manager.

With its sophisticated sensors, the Trace Gas Orbiter is designed to measure the abundance and distribution of rare gases in the martian atmosphere. Scientists will be paying particular interest to any methane found by the TGO, as it could mean one of two things – geological activity or biological processes on the planet. However, detecting methane alone is not enough to distinguish between these processes, but with addition of the Surface Science Platform and the ExoMars rover in 2018, which will search for biomolecules and biosignatures, the apparent cause of methane emission could be determined more conclusively.

The TGO is also designed to operate as a communication link with Earth, and indeed a 2.2 m-diameter high-gain dish is already providing a 2 Mbit/s link with Earth, allowing for initial checks of its scientific instruments.

What is also working well is the TGO’s high-resolution camera, which was switched on in the first week of April. The first image taken shows a randomly selected portion of the sky close to the southern celestial pole. This image is composed of two frames taken in slightly different directions by using the camera’s rotation mechanism. Subtracting one frame from the other reveals a number of equally offset positive and negative images of stars. 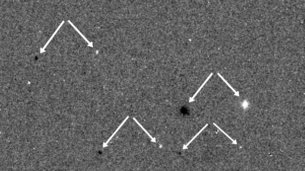 The image was taken by the Colour and Stereo Surface Imaging System, CaSSIS, and points to a randomly selected portion of the sky close to the southern celestial pole. The picture shows the result of taking one CaSSIS frame, turning the camera’s rotation mechanism, and then taking another. By subtracting the two frames, a series of bright and dark spots are seen, all equally offset from each other, demonstrating that these are positive and negative images of the same stars. The field-of-view is 0.2º in the horizontal direction, and the arrows indicate the offset star positions. Image Credit: ESA/Roscosmos/CaSSIS

“The initial switch-on went quite smoothly and so far things look good,” says Nicolas Thomas from the University of Bern in Switzerland, and camera principal investigator. “Although it was not designed to look at faint stars, these first images are very reassuring. Everything points to us being able to get good data at Mars.”

So far, TGO and Schiaparelli have completed more than 83 million km of their 500 million km journey to Mars. Aside from a major course correction in July, which will line the spacecraft up for arrival at Mars on 19 October, it seems all systems are go. “TGO and Schiaparelli instruments are all working well, and the science teams that operate them will continue calibration and configuration checks while en route to Mars to ensure they are ready for the exciting mission that lies ahead,” says Håkan Svedhem, ESA’s ExoMars 2016 project scientist.