Could an encounter with a passing dark molecular cloud be responsible for killing off the dinosaurs?

The mass extinction responsible for the disappearance of some three-quarters of the plant and animal species on Earth—including all non-avian dinosaurs, is widely thought to have been caused by an impact of an asteroid at Chicxulub around 65.5 million years ago. This event, known as the Cretaceous–Paleogene (K–Pg) extinction event, often shorted to just K-Pg, is marked in the geological record by a thin layer of sediment called the K–Pg boundary, which can be found throughout the world in marine and terrestrial rocks.

The boundary clay shows high levels of the metal iridium, which is rare in the Earth's crust but is abundant in solar system bodies such as asteroids, hence the assumption that an impacting asteroid was responsible for the world-wide spread of this material. Now, however, a team of scientists based in Japan are suggesting that the crater impact at Chicxulub is not solely responsible for the KPg extinction event, but that a giant molecular cloud passing through the solar system led to an environmental catastrophe of Earth, driven by an enhanced flux of cosmic dust particles and cosmic rays, which caused global cooling and the destruction of the ozone layer, and resulted in a “Nebula Winter.”

The Milky Way Galaxy has a disk with a radius of 10 kilo parsecs (kpc) and a thickness of 200 parsecs (pc). Our solar system is located within the Galaxy at around 8.5 kpc from its centre and it has been estimated that encounters with around 135 giant clouds of over ~100 protons/cm3 and ~16 clouds of over ~1000 protons/cm3 have likely occurred throughout the age of the Sun to date (~ 4.6 billion years). 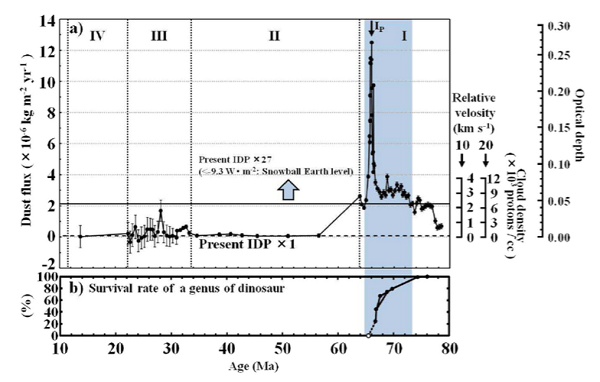 The team from Japan, led by Tokuhiro Nimura based at the Japan Spaceguard Association, Okayama, suggest that the iridium-rich dust flux from a dark cloud on the surface of the Earth is estimated to be as high as 1 kg/m2 Myr−1 in the case of a cloud with a gas density of ~ 103 protons/cm3 and a relative velocity of 10 km/s and that the evidence of a dark nebula encounter can be found in deep sea sediments, as an iridium-rich layer. Accordingly, the team have analysed a core sample of pelagic sediment extracted via the Ocean Drilling Program (ODP) at a water depth of 5713.3 m in the central North Pacific – a site that has been in an area of pelagic accumulation at least since the end of the Cretaceous Period.

Their analysis of the sample shows a sharp spike of iridium which corresponds to the Chicxulub asteroid impact, however, there is also a broad iridium component that spans more than 8 Myr and cannot be explained by any mixture of the materials on the surface of the Earth, and thus requires contribution from extraterrestrial materials. This evidence, along with the iridium anomaly, is in the form of elemental ratios such as oxygen isotopes and high strontium ratios that correspond with climate cooling in the last 8 Myr of the Cretaceous period, the period in which the dark cloud is suggested to have had its impact.

Past studies have argued that the iridium anomaly can be explained by a mixture of volcanic basalt like that of Kilauea in Hawaii. However, the team disagree with this suggestion, stating that the volcanic basalts cannot produce materials outside of a specified area and that area does not coincide with where the sample was extracted from. Instead, Nimura and colleagues suggest that as a giant molecular cloud blankets the Solar System, the Sun's heliosphere shrinks down to ~ 1 AU from its current size (~ 400 AU). Cloudlets formed by Rayleigh–Taylor instabilities collide with each other in the inter-planetary space to produce ~GeV cosmic rays. At the same time, the flux of cosmic dust particles is enhanced, however these remain in the stratosphere for several months or even years and work as sunscreens to reflect back the sunlight.

This initiates a global cooling, resulting in the growth of an continental ice sheet that subsequently leads to both marine regression and exposure of continental shelves. The resultant enhancement of denudation and weathering leads to a high strontium ratio due to the abundance of strontium in the continental crust. In addition, the oxygen isotope ratios correspond to the demise of planktonic and benthic foraminifera whose calcium carbonate shells settle along the ocean floor to form a sediment layer rich in δ18O (delta-18-O).

The team also state that a mass extinction by just one asteroid impact seems unlikely for the following two reasons. First, a severe perturbation in the global environment of Earth would finish nearly 5 years after the impact and solid particles distributed by the colliding asteroid would settle down in only a few months in the troposphere and in a few years for the stratosphere. Nimura and colleagues cite the cases of Pinatubo and the Toba super eruption, that occurred in June 1991 and around 71 thousand years ago respectively, and where 800 km3 of the total erupted magma from the Toba eruption was deposited as ash fall. The team state that although the Chicxulub impact is estimated to be 100 times larger than Toba, the sunshield effect would not persist beyond about 5 years.

Second, the team state that impact events that are of similar scale to that of Chicxulub, such as the Chesapeake Bay, Woodleigh and Popigai impact cratering have not caused the widespread devastation associated with Chicxulub. In particular, the 120-km diameter Woodleigh crater in western Australia, which is about ~80% the size of the Chicxulub crater (~150 km diameter), has no discernible evidence linking it with a Late Devonian (364 Ma) mass extinction event.

Nimura and colleagues also point out that an encounter with a dark cloud perturbs the orbit of asteroids and comets through its gravitational potential, causing showers of asteroids and/or comets. Could this be the cause of the Chicxulub impact?