Displaced dusty planet booted out of its birthplace

Orbiting at an astounding 650 AU from its host star (one AU is the average distance between Earth and the sun, or 93 million miles), further research into a planet discovered last year, suggests that the planet has likely been kicked out of its place of origin by a gravitational disturbance, echoing processes that may have occurred in the early epochs of our own solar system.

The extra-solar system that is home to HD 106906b, an isolated giant weighing in at a hefty 11 times the mass of Jupiter, caught the eye of researchers as surrounding its young host star is a lopsided comet belt. Such a feature is regarded by some astronomers to be an indication that the solar system has endured some violent disruptions in its relatively short life-time. As the star is so young – around 13 million years old, compared to our sun's 4.5 billion years – it gives researchers a snapshot of what our own solar system may have looked like in its infant days.

It is suggested that our own belt of comets, the Kuiper belt, lost a large fraction of its mass as it evolved. How exactly this occurred, is still open for debate, but one such mechanism could be the migration of large objects drifting inwards towards the host star and back out again, causing violent episodes of gravitational disturbance that subsequently kicks out other bodies, such as planets, in the process.

Finding planets at such large distances from their host, such as HD 106906b, whose orbit around its host star is 16 times farther than Pluto is from the sun, could also be an indication of planet displacement by large body interaction. Nonetheless initial investigations into HD 106906 b led some researchers to suggest that the wayward planet formed much like a star, by condensing from its own swirling cloud of gas and dust.

However, after a re-analysis of the exiled planet by a team of astronomers led by Paul Kalas, an adjunct professor of astronomy at the University of California, Berkeley, using the Gemini Planet Imager (GPI) and the Hubble Space Telescope, a tantalising new discovery found around HD 106906b has prompted a rethink of its past history.

Measurements made of the exiled planet suggest it may be dustier than similar objects and that it may even have its own ring of debris that it dragged along with it, as it was booted out of the system. "We think that the planet itself could have captured material from the comet belt, and that the planet is surrounded by a large dust ring or dust shroud," says Kalas. “We conducted three tests and found tentative evidence for a dust cloud, but the jury is still out.” If this is indeed the case, then HD 106906b will be one of the first detected exoplanets that resembles Saturn and its ring system. 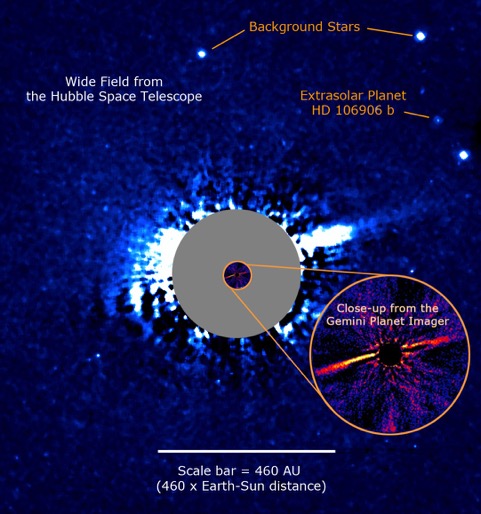 Image showing a wide-angle view of the star HD 106906 taken by the Hubble Space Telescope and a close-up view from the Gemini Planet Imager. The wider field in blue shows Hubble Space Telescope data where the star's blinding light is artificially eclipsed (gray circular mask). HD 106906b, the exiled exoplanet that may have a dusty ring system of its own is located in the top right corner.

Although the interpretation of these results looks promising, for each of the three properties analysed by the team, alternate explanations are possible. “The planet is also unusual in that its orbit is possibly tilted 21 degrees away from the plane of the inner planetary system, whereas most planets typically lie close to a common plane,” explains Kalas. It is clear that further observations of HD 106906b are needed to ascertain if this unusual planet can pass for Saturn’s counter part – something the team hope to achieve with the Hubble Space Telescope in the near future.

The GPI operates on the Gemini South telescope and the GPI Exoplanet Survey is operated by a team of astronomers at UC Berkeley and 23 other institutions. One of their main aims is to target 600 young stars, all less than approximately 100 million years old, to understand planetary dynamics and how these interactions shape planetary systems over time.