Final interview for Scott Kelly tomorrow before his return to Earth

In his final week in space, tomorrow at 12:05 p.m. EST, NASA astronaut Scott Kelly will give his final news conference from orbit live on NASA Television before his return to Earth on Tuesday 1st March.

Kelly launched to the space station on 27th March, 2015, from the Baikonur Cosmodrome in Kazakhstan, paving the way for future missions when he embarked on a 340 day mission in space along with Russian cosmonaut Mikhail Kornienko. After landing, Kelly will have spent in total 520 days of cumulative time in space making him a record holder among U.S astronauts. Kelly will land in Kazakhstan at 11:27 p.m. (10:27 a.m. Kazakhstan time on March 2) with Kornienko of the Russian space agency Roscosmos, and cosmonaut Sergey Volkov, also of Roscosmos. Kelly will be the first American to complete such a long-duration mission, and one of the first humans in more than 15 years to take up the challenge. The last person to spend a year in microgravity was Russian cosmonaut Sergei Avdeyev in 1999.

The mission has been significant for a number of reasons. Firstly, NASA partnered with other space agencies to conduct numerous human research investigations to see how the human body changes during a year in space and how it adjusts to weightlessness, isolation, radiation and the stress of long-duration spaceflight. Two ways in which test the effects of long spaceflights on the human body are field tests and fluid shifts. Fluid shifts deal with changes in the visual system while field tests deal with post-landing capabilities of astronauts immediately after long spaceflights.

This collaborative approach between agencies is working well, well enough to be considered a model for future long-duration missions. "Differing approaches to solving problems must be considered, but when new processes are learned that can benefit future missions or reduce duplication of tasks, that is considered a successful partnership,” said John Charles, chief scientist of the NASA Human Research Program, who has a doctoral degree in physiology and biophysics. 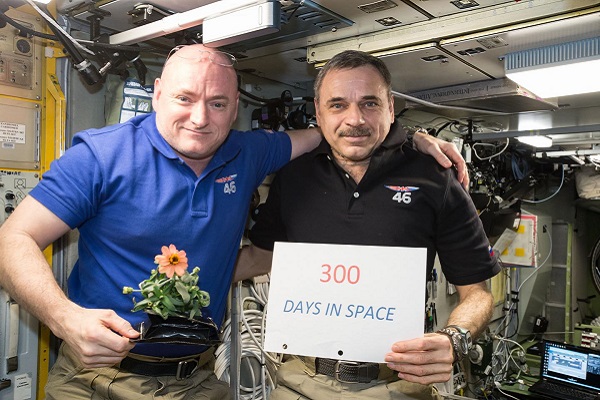 In addition to research conducted aboard the space station, Kelly’s twin brother, former NASA astronaut Mark Kelly, participated in parallel twin studies on Earth. The study will help scientists compare the effects on the body and mind in space and has thus focused on four areas: human physiology, behavioural health, microbiology/microbiome, and molecular or -omics studies. Analysis of the tests will hopefully provide broader insights into the subtle effects and changes that may occur in spaceflight as compared to Earth by studying two individuals who have the same genetics, but are in different environments for one year. "The mission will continue even after Scott returns," said Charles. "For the one-year mission research, we will be collecting post-flight medical data three-months and six-months after he is back on Earth. For the twins study research, we will continue to collect data as far out as a year after his return."

Such an insight as to how the body changes during an extended stay in space, will benefit future astronauts, as longer missions, such as a trip to Mars are considered. “The post-flight data are as important as the inflight data to help us learn how to send humans safely to Mars and return them safely to Earth. We would be happy to see no difference in a six-month mission versus a year-long mission," said Charles. "But we do anticipate changes. This was the first time we have done indepth omics profiles on twins. The longer a human is in space, the more that individual is exposed to risks such as radiation and weightlessness. Our integrated team of researchers are addressing those risks to create countermeasures to enable more advanced space travel. By integrating international collaborative science, and thus emphasising the 'I' in International Space Station, our combined efforts can yield the biggest benefit."