A Russian Soyuz rocket, carrying the first ever astronaut from the United Kingdom Tim Peake, along with NASA astronaut Tim Kopra and Russian astronaut Yuri Malenchenko launched into orbit today, December 15, 2015, from Baikonur Cosmodrome (Kazakhstan). Their science mission at the International Space Station is expected to last six months.

They launched at 6:03 a.m. EST (1103 GMT), beginning their six-hour journey to the ISS. This is Malenchenko ' sixth spaceflight (including trips to the ISS and Russia's Mir space station), and the Soyuz TMA-19M spacecraft took off under his command. The astronauts are part of Expedition 46 mission to the International Space Station and will remain on the ISS for Expedition 47.

The astronauts will join current space station commander and NASA astronaut Scott Kelly and Russian cosmonauts Mikhail Kornienko and Sergey Volkov, who are scheduled to depart the ISS in March. Kopra, currently on his second mission, will take over as commander.

The craft is expected to rendezvous and dock on the Russian segment at approximately 12:24 p.m. EST (1724 GMT). The hatches will open between the Soyuz and space station are expected to be opened by 2:25 p.m EST (1925 GMT).

The mission is Peake's first time traveling to space, and he will also be the first British astronaut to live aboard the space station.

"The U.K. has always been part of the European Space Agency, but only recently has it been part of the Human Spaceflight Program," Peake said during a news conference in September. "And that really opens the door for Great Britain; it opens the door in terms of the scientific community that can now enjoy participating in the scientific research we do onboard the space station. It also opens the door for U.K. industry to become involved in some of the engineering and technological work that's being done onboard the space station." 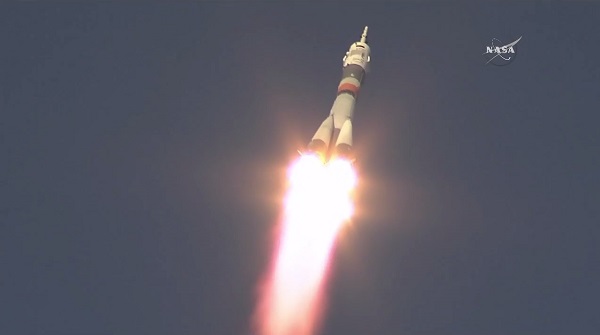 During the news conference and in later interviews, the crewmembers discussed the science they'll get to perform while aboard: projects that will span human research, biology and biotechnology, astrophysics research. Peake particularly called out a medical research task, where they will grow crystals from disease-causing proteins in microgravity. Because there is so little to disturb the protein growth, they will be able to grow large, pure crystals to investigate drugs that can counter them.