A team of astronomers from Chile have observed a disk that surrounds a young star less massive than the Sun, to confirm theories about the interaction between recently formed planets in protoplanetary discs.

Using the Atacama Large Millimeter/submillimeter Array (ALMA), astronomers have observed a dust ring around a star roughly 650 light years from Earth, that shows signs of its disc being sculpted by planets in the midst of formation. Although it is now confirmed through the direct detection of giant planets in protoplanetary discs that planets are formed in these regions, the planet formation process is still rather poorly understood.

Now however, research led by Hector Canovas from Universidad de Valparaiso on the disc around Sz 91, could enhance our knowledge on this process, as images taken by the team show the first disk around a star that is less massive than ours, that simultaneously presents a migration of dust particles from the outermost zones along with signs of interaction between young planets in the innermost zone of the disk.

For a long time it was thought that the time-scale for dust grains drifting inwards towards the evolving protostar were too fast to allow for significant growth of solid material to form. However, recent simulations suggest that radial-drift is not as effective as expected, showing that grains could survive the so called ‘radial-drift barrier.’

As planetesimals grow, models also predict that a forming giant planet should carve a gap or cavity in a protoplanetary disc, causing a pressure maximum at the inner edge of this disc. This has repercussions on the distribution of dust particles as small particles (~10?m) are allowed to enter the cavity without accumulating at the pressure maximum while larger particles in the outer disc drift inwards until they are held back near the pressure maximum. Thus, the combination of both effects should create dust structures in the form of an accumulation of large particles in a ring-like structure close to the inner edge of the outer disc. 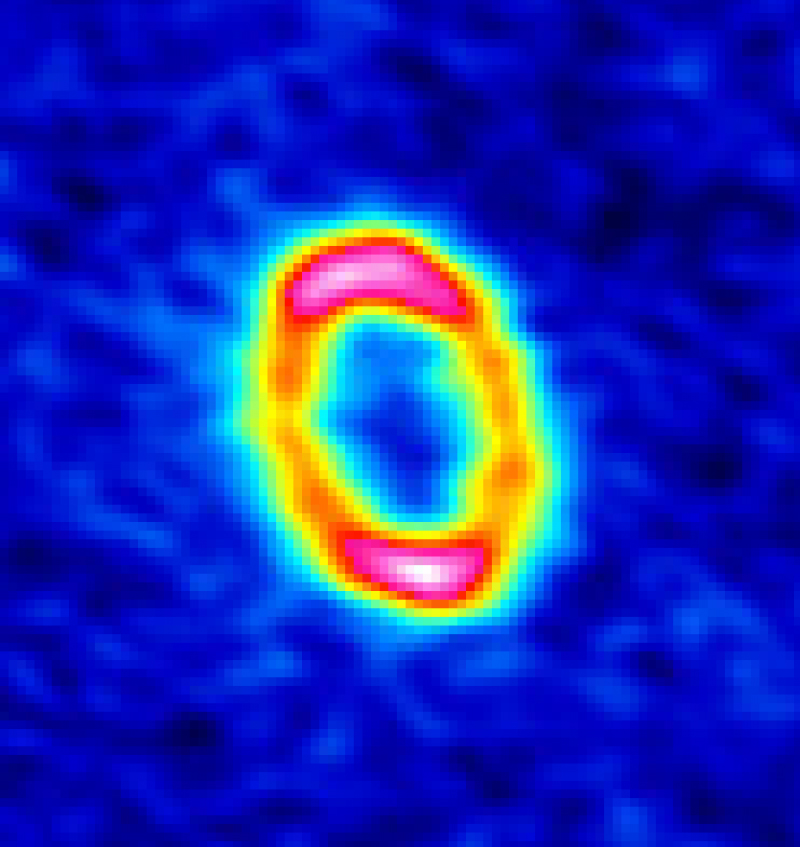 TuImage taken by ALMA of the dust ring that surrounds the young star Sz 91. This ring is primarily made up of mm-sized dust particles. The interaction between several recently formed planets and the protoplanetary disk that still surrounds the star probably generate the dust ring observed by ALMA.nnel

“The sharp image from ALMA shows a ring around the young star. And it is a surprisingly large ring, over three times the size of Neptune's orbit (a radius of approximately 110 astronomical units (AU),” explains Canovas. Only the ring is shown on the ALMA images as this is made-up of cold dust particles and is what ALMA is designed to detect. However the images do reveal that the distribution of the gas and the large grains is very different, with the large particles detected up to ?150 au while the gas is detected up to ?488 au.

Planets and the merging protostar are primarily made up of hot gas and these will need follow-up observations with additional telescopes. Nonetheless, based on the current paradigm of planet-disk interactions, “only giant planets orbiting the innermost parts of the disk can explain the presence of a ring with such a large radius,” says Antonio Hales, ALMA astronomer and member of the research team.

The paper, due to be submitted to Monthly Notices of the Royal Astronomical Society (MNRAS), states that the teams findings are in qualitative agreement with predictions of a pile-up of large grains due to a combination of pressure bumps created by low-mass companions, and radial drift triggered by gas drag. This concentration of large grains could facilitate the formation process of further planets as the particles may grow faster because of enhanced density of solids. “The results of this investigation show that Sz91 is a highly important protoplanetary disk for the study of planetary formation, planet-disk interactions, and the evolution of these disks around stars of lower mass, as Sz91 shows evidence of all these processes simultaneously,” concludes Matthias Schreiber, coauthor of the study.