The James Webb Space Telescope (JWST), the much anticipated successor to the Hubble Space Telescope (HST), that when operational will be able to see the first galaxies forming approximately 13.5 billion years ago, is being primed to receive all 18 of its primary flight mirrors. The rather large, gold coated, hexagonal mirrors are made from beryllium, a very strong but light metal and are measured with precision to ensure they will be a perfect fit in the telescope’s structure. The gold coating is used to improve the mirror’s reflection of infrared radiation, which is the band of light the telescope will ‘see’ in.

Planned for a launch date of October 2018, JWST is a collaboration between NASA, the European Space Agency (ESA) and the Canadian Space Agency (CSA). Some of the telescopes mirrors will be housed on “wings”, described as the side portions of the backplane structure of the telescope and are necessary so that the observatory can fold up in order to fit into the launch vehicle. 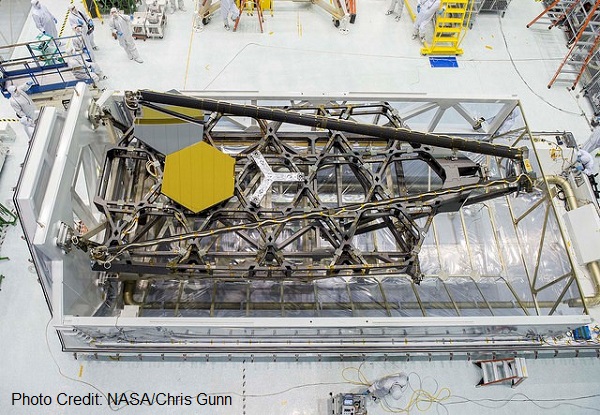 Bird’s eye view of JWST’s test backplane and mirrors sitting in their packing case at NASA Goddard’s cleanroom, prior to dispatch to Johnson Space Center for cryo testing earlier this year.

The wings have recently been deployed by engineers at NASA's Goddard Space Flight Center in Greenbelt, Maryland, a process which can take up 16 hours or more to complete for each wing. Tests such as these are crucial, as once the telescope is launched it cannot be serviced, unlike the HST, which was serviced five times in low-Earth orbit by space shuttle crews.

“The complexity of the mirror assemblies comes from the fact that they are designed to be very lightweight, work at cryogenic temperatures below -400F, survive launch vibration and forces, be align-able on-orbit via actuators, and then stay aligned for up to two weeks as though they are a single large mirror,” said Lee Feinberg, NASA Optical Telescope Element Manager for the James Webb Space Telescope at the Goddard Space Flight Center in Greenbelt, Md.

The technical challenges of building a complex telescope such as the JSWT has meant that engineers have had to be very creative in getting the primary mirror segments to work as though they are a single large mirror. To simulate a single perfect focus and observe with clarity galaxies millions and billions of lightyears away, each mirror is aligned to 1/10,000th the thickness of a human hair. To achieve this, engineers have used six tiny mechanical motors, or actuators, attached to the back of each mirror piece to capture the images they expect Webb to produce. “What’s even more amazing is that the engineers and scientists working on the Webb telescope literally had to invent how to do this.” continues Feinberg.

It is not only the mirrors that are gearing up for integration on the telescope - the Integrated Science Instrument Module (ISIM), characterised as the scientific “heart” of JWST and is one of the three major elements that comprise the Webb Observatory flight system is undergoing its final “super cold” test inside a thermal vacuum chamber. Such tests will mimic the harsh conditions the telescope will encounter when it is 1 million miles (1.5 million kilometers) from Earth.

A live stream video from the Goddard clean room showing the mounting of JWST’s first flight mirror will occur this weekend, and can be viewed direct from the jwst.nasa.gov website.