Japan’s Astro-H mission is due to launch on February 12, 2016, nearly 5 years after the 9.0- magnitude earthquake and tsunami in 2011 that devastated the country.

ASTRO-H (formerly known as "NeXT") is the sixth satellite in a series of highly successful X-ray astronomy missions initiated by the Institute of Space and Astronautical Science (ISAS) of Japan Aerospace Exploration Agency (JAXA) and is due to be launched from the Tanegashima Space Center, aboard an H-IIA rocket into low Earth orbit in a few days time.

The purpose of ASTRO-H is to explore the structure and evolution of the high energy Universe, and will observe phenomena that range in energy from 0.3 to 600 keV. In particular the Astro-H mission objectives will focus on tracing the growth history of the largest structures in the Universe, along with providing insights into the behaviour of material in extreme gravitational fields, determining the spin of black holes, understanding the physical conditions in sites of cosmic-ray acceleration, and the distribution of dark matter in galaxy clusters.

To achieve these objectives, Astro-H will make use of a Soft X-ray Spectrometer (SXS), a device that combines a lightweight Soft X-ray Telescope paired with a X-ray calorimeter Spectrometer. The Calorimeter is an array of microcalorimeter detectors at the focus of a large X-ray telescope that converts the energy of an X-ray photon (captured by the detectors) into heat, which can then be read by a thermometer.The heat is directly proportional to the X-ray’s energy and it can reveal much about the physical properties of the object emitting the radiation. 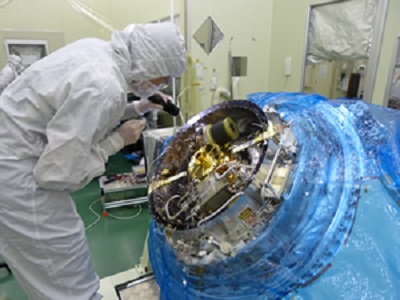 The SXS instrument in many respects resembles the Goddard-built X-ray Spectrometer that flew on Suzaku and for good reason, as the spectrometer has been built in collaboration with NASA/Goddard Space Flight Center. Goddard scientist Richard Kelley, one of a number of scientists working on the instrument was named Goddard’s Innovator of the Year in 2008 because of his work advancing SXS-related technologies, including the aforementioned microcalorimetry detection technique, however this new instrument is set to surpass the original as a number of significant improvements have been made. “The technology has increased dramatically,” says Kelley. “In 2008, we couldn’t have proposed such an array because its technology-readiness level just wasn’t high enough.”

The new 36-pixel microcalorimeter array is larger in size than the 32-pixel array that flew on Suzaku and it also offers better energy resolution due to the improved absorbers implemented by the team. Other improvements include upgrades in the area of detector performance, cooling technologies, and collecting area. While the Astro-H instrument represents a jump in capability, the team have not slowed down their efforts in refining the technology as they are now developing a 4,000-pixel microcalorimeter array for the European-led Advanced Telescope for High-ENergy Astrophysics mission, expected to launch late next decade.

ASTRO-H has been built by a major international collaboration led by JAXA with over 70 contributing institutions in Japan, the US and Canada. The satellite carries three other instruments designed to extend the range of currently observed frequencies. These include the Soft X-ray Imager (SXI) that expands the field of view with a new generation CCD camera in the energy range of 0.5-12 keV, the Hard X-ray Imager (HXI) that performs sensitive imaging spectroscopy in the 5- 80 keV band and the non-imaging Soft Gamma-ray Detector (SGD) that extends Astro-H’s energy band to 300 keV.