Hopes of finding gravitational waves were dashed last year, when the seemingly positive result from scientists working on the BICEP2 telescope in the South Pole were subsequently rejected, as further research revealed the signals to be polarized dust emission instead.

However, finding and understanding these enigmatic phenomena has not stopped there. On Wednesday (2nd December), LISA Pathfinder, ESA's technology demonstrator for detecting gravitational waves, is set for launch on a Vega rocket from Europe's Spaceport in Kourou, French Guiana at 04:15 GMT (05:15 CET). Separation from Vega is expected at 06:00 GMT (07:00 CET), with first contact expected two minutes later.

LISA Pathfinder will test-drive the hardware for detecting gravitational waves – tiny perturbations in the fabric of space-time that are theorised by scientists to have been produced in the fractions of a second after the big bang, when the Universe underwent an incredibly rapid period of inflation. These waves are therefore a signature of this inflationary phase and detecting these waves would be an additional confirmation of Einsteins Theory of General Relativity.

ESA's space probe needs to get as far away from the pull of Earth’s gravity as possible in order to conduct its experiments. Accordingly LISA Pathfinder is heading for an orbit around the L1 Lagrange point, a gravitationally-stable location 930,000 miles (1.5 million kilometres), from Earth in a sunward direction.

Once there the probe will pave the way for future missions by testing in flight the very concept of gravitational wave detection. To achieve this, two test masses will be put in a near-perfect gravitational free-fall and measurements of their motion will be taken with unprecedented accuracy. 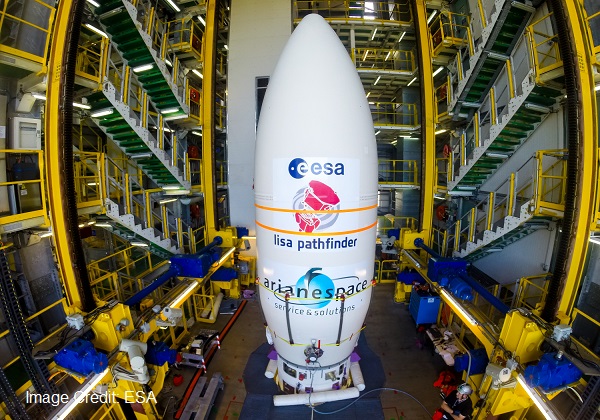 LISA Pathfinder aboard the Vega launcher – fully assembled in its mobile gantry at Europe's Spaceport in Kourou, French Guiana.

“LISA Pathfinder is a complex mission,” says flight director Andreas Rudolph. “Even after we’re safely in space, we will have to make seven or eight thruster burns in the first 10 days to take it as safely as possible through Earth’s radiation belts and get it onto the correct trajectory.” LISA Pathfinder is expected to arrive in the virtual L1 position in late January 2016, “until then teams will be working intensively to ensure that the thruster burns go as planned, that our navigation is correct and that we ensure the instruments and all flight systems are working normally,” continues Rudolph.

You can watch the liftoff which will be streamed live from Kourou, via two separate programmes on Wednesday at 03:55 GMT (04:55 CET) - www.esa.int.