Last look at geological activity on Enceladus before Cassini moves on

Tomorrow, (19th December) at around 12.49 p.m EST, NASA’s Cassini spacecraft will get its final close-up look of Enceladus, Saturn’s icy moon that has proved to be one of the great triumphs of Cassini's historic mission at Saturn, before the spacecraft heads towards other moons of Saturn, starting with Aegeaon and Pan.

This little moon has stunned scientists with strong evidence that a regional subsurface sea could be lurking under its icy exterior and that active geysers at the south pole could be the first tantalising signs of hydrothermal activity beyond Earth. To get a better look at the moon’s famous plumes, earlier in October, Cassini made a daring flight 30 miles (48 kilometers) above Enceladus' south pole to obtain the most accurate measurements yet of the plume's composition, hopefully giving new insights into the ocean world beneath the icy crust. All of these discoveries have thus made Enceladus one of the top destinations for future exploration to assess its potential for life beyond Earth.

"Cassini's legacy of discoveries in the Saturn system is profound," said Linda Spilker, Cassini project scientist at NASA's Jet Propulsion Laboratory, Pasadena, California. "We won't get this close to Enceladus again with Cassini, but our travels have opened a path to the exploration of this and other ocean worlds."

Although not the closest encounter of Enceladus, this last flyby will focus on measuring how much heat is coming through the ice from the moon's interior by utilising Cassini's Composite Infrared Spectrometer (CIRS) instrument to observe heat flow across Enceladus' south polar terrain. This will hopefully assist scientists to understand what is driving the plume of gas and icy particles that sprays continuously from an ocean below the surface. "Understanding how much warmth Enceladus has in its heart provides insight into its remarkable geologic activity, and that makes this last close flyby a fantastic scientific opportunity," says Spilker. 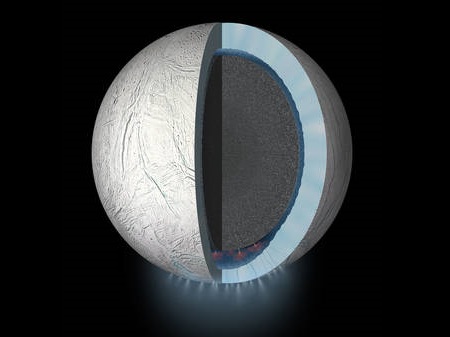 An artist’s rendering showing a cutaway view into the interior of Saturn’s moon Enceladus, suggested to have a global ocean and likely hydrothermal activity. A plume of ice particles, water vapour and organic molecules sprays from fractures in the moon's south polar region.

This remarkable discovery of geologic activity on Enceladus was made not long after Cassini arrived at Saturn, and it quickly prompted changes to the mission's flight plan in order to maximise the number and quality of encounters with the icy moon. This moderately close flyby will be the 22nd of Cassini's long mission and although the spacecraft will continue to observe Enceladus during the remainder of its mission (until September 2017), it will be from much greater distances at closest, more than four times farther away than its encounter tomorrow.