The rippled surface of dark sand dunes along the northwestern flank of Mount Sharp inside Gale Crater, are now being studied up close by NASA’s Curiosity Mars rover and have revealed that the dunes are nearly a towering two stories tall and are as broad as a football field.

This particular section of dune field has been informally named "High Dune” and is part of "Bagnold Dunes," an area close to Curiosity's current location. Observations of this dune field show that edges of individual dunes move as much as 3 feet (1 meter) per Earth year and such studies are a first for Curiosity as no active dunes have been visited anywhere else in the solar system other than on Earth. It is hoped that more information on the composition of the dune material will be made available, as part of Curiosity’s planned investigations include scooping up a sample and analysing it in its mobile laboratory.

After successfully investigating outcrops closer to its landing site, Curiosity trekked to Mount Sharp, reaching the base in 2014. The rovers main mission objective is to now examine successively higher layers of Mount Sharp, and aid in the investigation of how Mar’s environment has changed over billions of years. "We've planned investigations that will not only tell us about modern dune activity on Mars but will also help us interpret the composition of sandstone layers made from dunes that turned into rock long ago," said Bethany Ehlmann of the California Institute of Technology and NASA's Jet Propulsion Laboratory, both in Pasadena, California.

How do researchers know that these are dunes and not windblown ripples of sand or dust, like those found at several sites visited previously by Mars rovers? Using sand dunes in the Namib Desert as a proxy for dune environments on Mars, researchers have ascertained that actual dunes form a downwind face steep enough for sand to slide down. 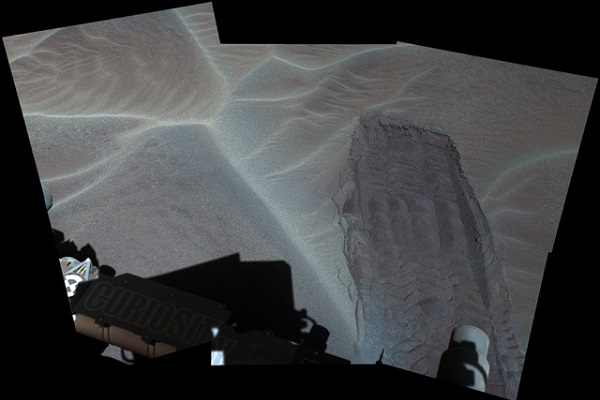 In a view from Curiosity's Mast Camera (Mastcam), a wheel track is left by the Mars rover exposing underlying material in a shallow sand sheet. Image Credit: NASA/JPL-Caltech/MSSS

Previous observations of the Bagnold Dunes with the Compact Reconnaissance Imaging Spectrometer on NASA's Mars Reconnaissance Orbiter have also indicated that mineral composition is not evenly distributed in the dunes. Olivine, a mineral in dark volcanic rock is a major component of the dunes – it is also one of the first to be altered into other minerals by water. Knowing how mineral grains are sorted away from heavier olivine-rich grains by the wind's effects, could help researchers to evaluate which method is responsible for the differing amounts of olivine deposited in some ancient sandstones i.e. via wind-blown processes or by alteration by water. "We will use Curiosity to learn whether the wind is actually sorting the minerals in the dunes by how the wind transports particles of different grain size," explains Ehlmann.