Eighty light years from Earth, a lonely planet adrift in space may have… a weather system.

Such are the latest findings concerning PSO J318.5-22, an extrasolar object in the Beta Pictoris moving group, discovered in the Pan-STARRS survey in 2013.

PSO J318.5-22 is roughly six times the mass of Jupiter. It is its large size that has lead scientists to believe it formed around a star. We are not sure how it came to “lose” its star – some form of gravitational perturbation has been cited as a possible culprit, but there is no conclusive information.

Now a team of scientists at the University of Edinburgh says that major variations of the planet’s brightness can be observed – and that these could be caused by a weather system. It is possible that something similar to the stormy spots on our own Jupiter is occurring on this enormous lost world.

Such observations could amount to a major breakthrough in the study of exo-weather – i.e. conditions on worlds beyond our solar system.

In the meantime, PSO J318.5-22 continues to be an object of fascination. Over the summer, for example, NASA released a cheeky, vintage style poster aimed at popularising the object, announcing that it’s the sort of place “Where the nightlife never ends!” 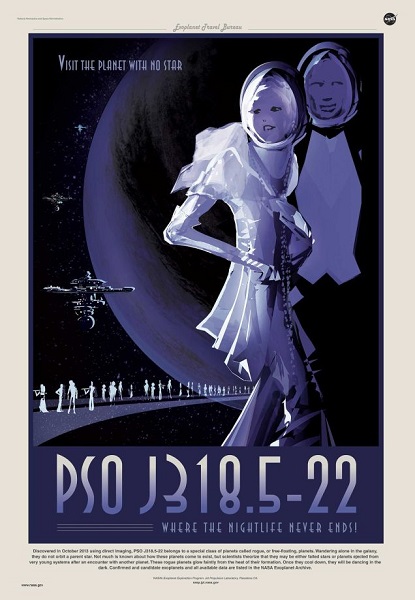