Potential “Planet Nine” discovery was announced on January 20, 2016, by Caltech scientists Mike Brown and Konstantin Batygin. In their paper, “Evidence for a Distant Giant Planet in the Solar System”, Batygin and Brown claim that they “demonstrate that the perihelion positions and orbital planes of the objects are tightly confined and that such clustering [as is seen in the Kuiper Belt] has only a probability of 0.007% to be due to chance, thus requiring a dynamical origin.”

The evidence they found points to the possibility of a giant planet with the mass of 10 Earths being located in the deep Kuiper Belt, in the frozen region of our solar system. The planet itself has not yet been located or photographed. Its orbit is about 20 times farther from the sun than than of Neptune. The researchers used mathematical models and computer simulations to map out Planet Nine's orbit after spotting a strange alignment in the orbits of six other Kuiper Belt objects.

The main evidence for the claim is that six of the farthest known Kuiper Belt objects have orbits that line up in such a way that would only happen if they were affected by a massive and as yet unknown planet's gravitational pull. The six KBOs' orbits all share the same tilt – roughly 30 degrees downward, relative to the plane of the eight officially recognized planets. If Planet Nine exists, it would be about the same size as the most commonly found exoplanets orbiting other stars and likely have a mass of ten Earths (half the size of Neptune), with the length of one Planet Nine year equalling between ten and twenty thousand Earth years. If a planet of that size is orbiting the sun beyond Neptune, it will affect the orbits of nearby objects. The planet appears to have an elliptical orbit and the closest it comes to the sun is about two hundred and fifty astronomical units (the distance from sun to Earth, equal to ninety-three million miles.). By comparison, Jupiter is about five astronomical units from the sun. 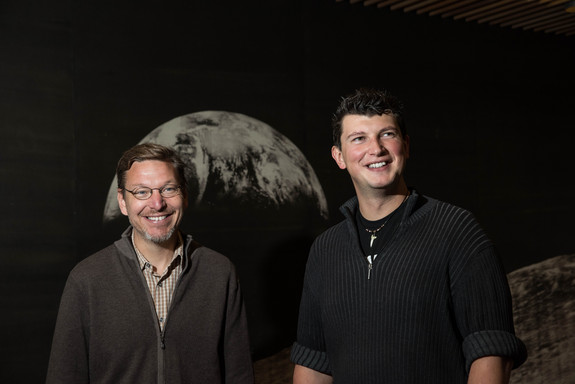 While a lot more research is needed to either prove or disprove the existence of Planet Nine, the overall reaction of the scientific community has so far been that of excitement. Greg Laughlin, an astronomer at the University of California, Santa Cruz, said that “The combination of Mike Brown, who has a really solid observational sense of what's out there, and Konstantin's theoretical brilliance – if it's out there, they've found it.” Alessandro Morbidelli, planetary scientist at the Observatoire de la Cote d'Azur, in Nice, France, and a referee for The Astronomical Journal, said “This paper for the first time gives a smoking gun for the existence of an additional planet.”

“This would be a real ninth planet,” said Mike Brown in a statement. “There have only been two true planets discovered since ancient times, and this would be a third. It's a pretty substantial chunk of our solar system that's still out there to be found, which is pretty exciting.” According to Brown and Batygin, Planet Nine may have formed closer to the sun and been kicked out to its current location after a gravitational interaction with Jupiter or Saturn. “One of the most startling discoveries about other planetary systems has been that the most common type of planet out there has a mass between that of Earth and that of Neptune,” said Batygin. “Until now, we've thought that the solar system was lacking in this most common type of planet. Maybe we're more normal after all.”

The new study was published in the current issue of the Astronomical Journal.