President of ISA Against Avio Takeover

On March 17, president of the Italian Space agency spoke out against a French industrial takeover of Italy's Avio, the primary contractor for the Vega small-satellite launcher.

In a statement posted on the agency’s website, Roberto Battiston said Italian authorities “have to guarantee that the advanced European Vega launcher remains Italian in word and deed.”

Cinven, the private-equity investor that holds an 85% stake in Avio and has been trying to sell for several years, has indicated that both Airbus Defence and Space and Safran have shown interest in their Avio shares.

Avio's minority shareholder is Finmeccanica, Italy's aerospace giant. Finmeccanica's management has mentioned the option of buying out Cinven, alone or with partners.

In December 2014, ESA countries have agreed to a multi-year investment in Ariane 6 and upgrades to the Vega rocket. With Ariane 6’s boosters and Vega’s first stage produced by Avio, the production run is likely to be more than 30 cores per year.

The advanced Vega-C rocket is scheduled to make its first flight in 2018. A further enhancement, called Vega-E, is currently being designed. The first Ariane 6 is scheduled to fly in 2020. By 2023, the current Ariane 5 rocket is likely to be retired in favor of Ariane 6.

Airbus Safran Launchers, the prime contractor for Ariane 5 and Ariane 6, is expected to become a 74 percent shareholder of launch-service provider Arianespace once the European Commission clears the company’s purchase of the 35 percent of Arianespace owned by the French government, through the French space agency, CNES.

Avio currently has a 3.4 percent shareholding in Arianespace, a position that European industry officials agree will grow now that the Vega rocket (five successful launches) has established itself and found a market in small science, technology and Earth observation satellites.

In his March 17 statement, Battiston appealed to Italian national pride in Vega to warn against an Avio purchase by non-Italian strategic buyers. 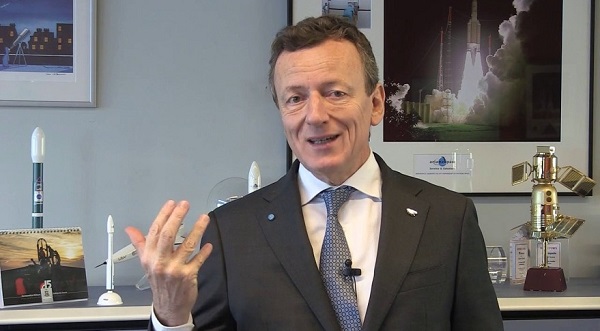 “First of all we want to say – with pride – that we are the sixth spacefaring power in the world,” Battiston said. “We have to maintain capabilities for an independent access to space.

“We have to guarantee that the Vega advanced European launcher remains Italian in word and deed. Investment fund Cinven holds more than 80 percent of the shares and could get a large payoff by selling its shares – even to space competitors.

“If that should occur, it would not only endanger the 1 billion euros of Italian public investment [in Vega], it would also be a defeat for spacefaring Italy, forcing it to ask, rather than to decide, to go into orbit.”