ALMA, the most expensive radio telescope ever built, was completed only four years ago, and has since steadily provided clear-resolution images of unprecedented quality. This new image of the accretion disk disproves the theory that the magnetic core of a young star would prevent the accretion disk from spinning and therefore prevent its ability to gather matter. The image clearly shows that the disk is, indeed, spinning. 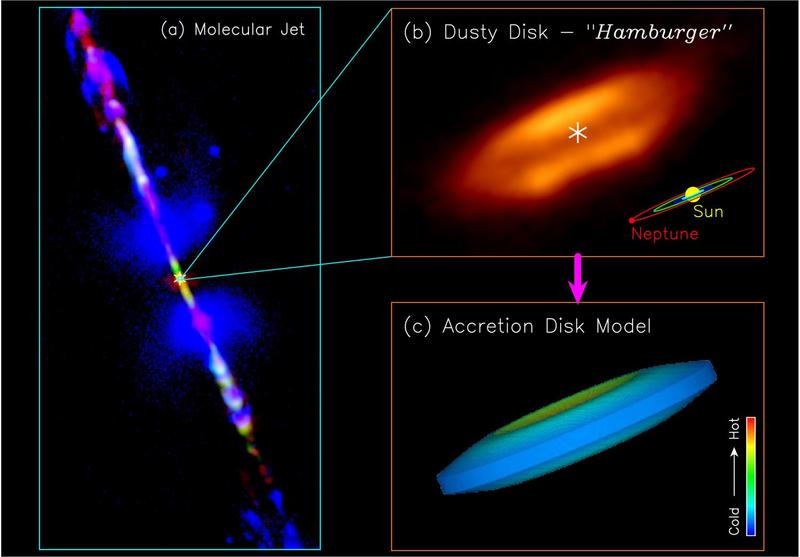 Jet and disk in the HH 212 protostellar system: (a) A composite image of the jet, produced by combining images from different telescopes. The orange image around the center shows the accretion disk at 200 AU resolution. (b) Close-up of the center of the dusty disk at 8 AU resolution. Asterisks mark the possible position of the central protostar. A dark lane is seen in the equator. Our solar system is shown in the lower right corner for size comparison. (c) An accretion disk model that can reproduce the observed dust emission in the disk. Credit: ALMA (ESO/NAOJ/NRAO)/Lee et al.

Accretion disks are most likely made of silicate, iron, and other interstellar matter. Due to their triple-layer appearance, the research team has described the accretion disk as very similar to a hamburger.

The complete study of the accretion disk image, “First detection of equatorial dark dust lane in a protostellar disk at submillimeter wavelength”, was published in Science Advances on April 19, 2017.