Scientists searching for light that marks a pivotal phase in the evolution of the Universe over 12 billion years ago, have been able to hone in on the signal thanks to a collection of 4096 dipole antennas set in the remote hinterland of Western Australia.

The period in question is known as the Epoch of Reionisation, or EoR and it describes the time when a dense, obscuring fog of primordial gas spread throughout the Universe, started to cool down allowing electrons and protons to combine and form the first neutral atoms. Over time, areas of higher-gas density began to collapse under gravity and clump together. Eventually, these regions would become the seeds of the first stars.

As the stars began to grow, they released large amounts of ultraviolet light, that was energetic enough to strip the electrons out of the surrounding neutral matter; a Universal event that is recognised as the Epoch of Reionisation.

But despite its crucial role in signing the end of the cosmic dark ages, the EoR is one of the least understood epochs in the history of the Universe because the first stars also significantly altered the chemical makeup of the cosmos.

Peering into the Reionisation era is therefore a major quest for astronomers, but it also presents a number of challenges. For starters, as the Universe expanded, the light from this very early period also stretched. It started off with a wavelength of 21 centimetres and is now around two metres long.

"The signal that we're looking for is more than 12 billion years old," explains ASTRO 3D member and co-author Associate Professor Cathryn Trott, from the International Centre for Radio Astronomy Research at Curtin University in Western Australia.

"It is exceptionally weak and there are a lot of other galaxies in between it and us. They get in the way and make it very difficult to extract the information we're after."

To help unravel the signals from the EoR from those of all the objects that sit in the light’s path, scientists are relying on collections of receivers spread across the surface on Earth. One such project is the Murchison Widefield Array (MWA); a low frequency radio array that looks like thousands of robotic spiders stuck on square mesh tiles (see below).

It sits in a radio-quiet environment 800 kilometres north of Perth, Australia and is designed to detect electromagnetic radiation emitted by neutral hydrogen - the EoR gas that would later form the first stars.

So far, though, no one has been able to observe it, says Dr Nichole Barry from Australia's University of Melbourne and the ARC Centre of Excellence. Barry is leading a team who are using the MWA to look for this ancient light.

The team have collected over 3000 hours of data from the array to make some preliminary results about the light and although their analysis does not precisely pinpoint the start or finish of the EoR, it does rule out some of the more extreme models, says Professor Trott.

"That it happened very rapidly is now ruled out. That the conditions were very cold is now also ruled out,” she added.

It’s a promising start and the work undertaken so far will help the team establish a framework for further research. "This approach will let us identify which bits are most promising, and analyse it better than we ever could before." 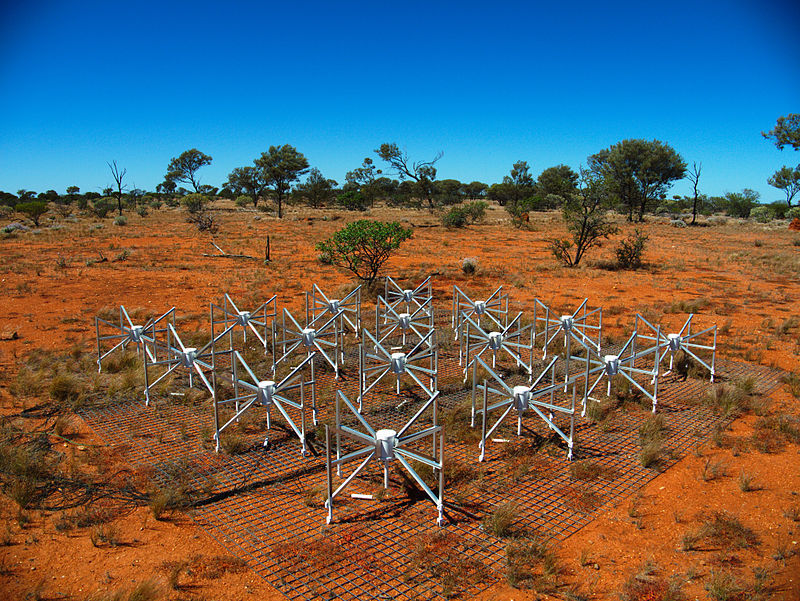 One of 128 tiles of the Murchison Widefield Array (MWA) telescope. Image: WA Department of Commerce.