Using HIFI on the Herschel Space Observatory an international team of astronomers have detected gas-phase ammonia in a protoplanetary disc around TW Hya for the first time. This detection will subsequently allow researchers to understand more about the main reservoir of nitrogen bearing species in our own solar system, which at present is currently unknown.

Ammonia is made up of one nitrogen atom and three hydrogen atoms (NH3) and is widely considered, theoretically, to be broadly distributed and abundant in the outer Solar System and is also found in the atmospheres of some of the planets. It is also one of the dominant compounds found in some carbonaceous chondrite meteorites that have crash-landed in various locations on Earth.

The amount of nitrogen in our solar system, along with all other elements, is dependant on the initial abundances that were available when our protoplanetary disc was first being formed. In its atomic and molecular form (N and N2 respectively), nitrogen is not directly observable in the interstellar medium (ISM), therefore finding it in substances such as ammonia and in other protoplanetary discs could aid researchers understand how nitrogen is dispersed and eventually locked up in various bodies around the Solar System.

The lead author of the recently submitted research paper, Vachail N. Salinas from Leiden Observatory, The Netherlands, describes how the international team observed TW Hya, a well studied system around 54 parsecs (pc) away. TW Hya is estimated to be 8–10 Myr, so a fledgling in terms of disc age. Past studies on the abundance of nitrogen in discs have found that on average 10 per cent to 20 per cent of nitrogen is contained in ices like NH3, NH+4, and OCN-. The relative abundance of the main nitrogen- bearing species compared to water, which is the most abundant volatile in interstellar ices and cometary ices, is around 5 per cent.

Water has already been detected in TY Hya, and along with ammonia, the team also report on the first detection of N2H+. Since ammonia is intermixed with H2O on interstellar ices, as part of their research, the team attempt to model the ammonia emission coming from TW Hya assuming that it is desorbed simultaneously with water.

Using a non-LTE excitation and radiative transfer code to derive the amount of NH3, N2H+, and for comparison H2O, the team find that the ammonia emission corresponds to an ammonia vapour mass that ranges from 7.0 x 1020 g to 1.1 x 1022 g – masses that are much smaller than the potential ammonia ice reservoir of > 3.0 x 1028 g. 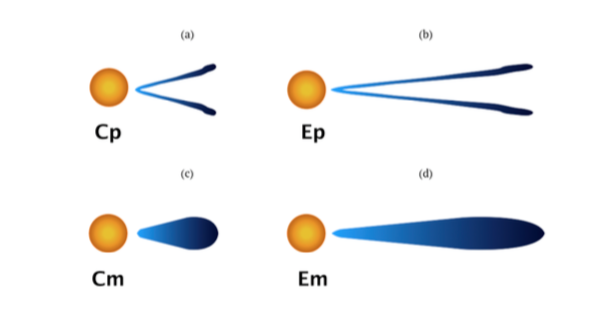 In order to understand the physical and chemical nature of the protoplanetary disc structure, the team construct four different spatial distributions of the molecules and of the four models, the team state that one model (the Cm model - see illustration above) stands out in that it yields much lower NH3/H2O ratios that are consistent with the low values found in solar system bodies and interstellar ices. These ratios, along with water OPR (ortho-to-para ratios) values – ratios used to determine the formation temperature of ice on cold interstellar dust – can be taken as evidence that the Cm model is a correct description for the distribution of H2O and NH3 in the protoplanetary disc.

If this is indeed the case, then the team state that as photodesorption does not operate in the mid plane, collisions of larger bodies can release NH3 and H2O which should explain the observed vapour. For this to occur a reduction of the total grain surface available for freeze out is required, for example through the growth of grains into pebbles and larger bodies followed by a sufficiently high collision rate to release the volatiles.

On the other hand, in the colder outer protoplanetary disc, the synthesis of ammonia in the gas phase relies on ion-molecule chemistry. If the water and ammonia emission follow the spatial distribution of their other three models (Cp, Ep, or Em – again, see illustration above), as TW Hya is considered to have a strong X-Ray flux, it is possible that X-Rays could be invoked to break apart molecular nitrogen allowing it to be sequestered into NH3.

The team conclude that additional spatially resolved observations of ammonia would help to constrain the radial extent of ammonia which would thus help to refine their current limits. This could be achieved by observing ammonia isotopes with the Atacama Large Millimetre/Submillimeter Array (ALMA) in Band 7 – a process that could be achieved in a couple of hours, should the observing time be successfully obtained.