Astronomers reveal the clearest picture yet of how the galaxy formed

Using data from the Sloan Digital Sky Survey, astronomers based at Notre Dame have used colours to identify the approximate ages of more than 130,000 stars in the galactic halo to produce the clearest picture yet of how the Milky Way formed more than 13.5 billion years ago.

The chronographic (age) map produced by the team shows a clear hierarchy, with the oldest stars near the centre of the galaxy, and younger stars further out. This hierarchical model of galaxy formation suggests that over billions of years the Milky Way formed by the merging and accretion of small mini-halos containing stars and gas.

"We haven't previously known much about the age of the most ancient component of the Milky Way, which is the Halo System," said Daniela Carollo, research assistant professor in the Department of Physics at the University of Notre Dame. "But now we have demonstrated conclusively for the first time that ancient stars are in the centre of the galaxy and the younger stars are found at longer distances. This is another piece of information that we can use to understand the assembly process of the galaxy, and how galaxies in general formed."

To produce this analysis, Carollo and team identified more than 130,000 blue horizontal-branch (BHB) stars – the only type of star whose age can be estimated by colour alone. Horizontal-branch stars refers to the position the star occupies on a Hertzsprung-Russell diagram – a two dimensional graph that plots a star’s brightness against its temperature (colour). BHB stars are stars that have evolved beyond the red giant stage and now burn helium in their cores and due to their extreme brightness they are typically classed as spectral type B3 to A0 and hence are very blue in colour.

"The colours, when the stars are at that stage of their evolution, are directly related to the amount of time that star has been alive, so we can estimate the age," said Timothy Beers, Notre Dame Chair of Astrophysics. "Once you have a map, then you can determine which stars came in first and the ages of those portions of the galaxy. We can now actually visualise how our galaxy was built up and inspect the stellar debris from some of the other small galaxies being destroyed by their interaction with ours during its assembly." 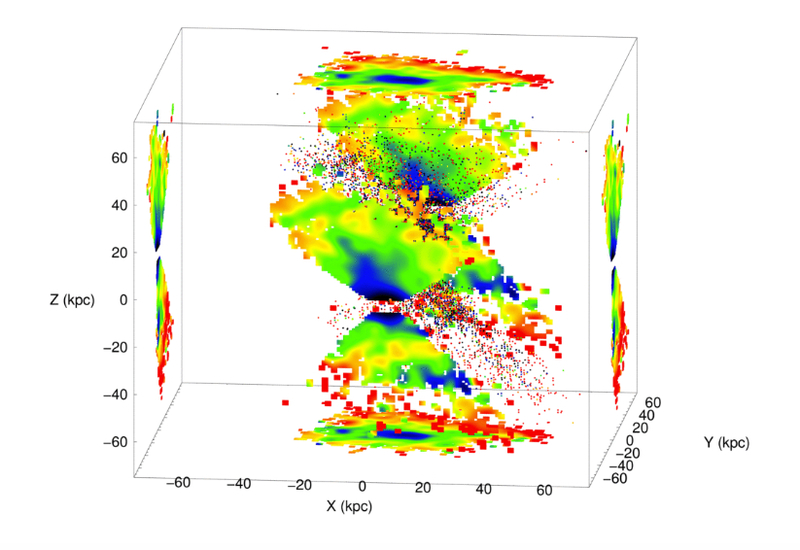 In their paper published in Nature, the team also state that their results agree with expectations from modern Lamda CDM cosmological simulations, which predict that the oldest stellar populations of a galaxy undergoing mergers are mainly concentrated in the inner regions of its resulting halo.

The technique used by Carollo and her team, which Beers helped develop around 25 years ago when he was still a postdoctoral fellow, can at present, only be used on our own galaxy and its neighbouring dwarf satellites. The team therefore hope to extend this method to other large galaxies in the Local Group such as Andromeda and the Magellanic Clouds with the aid of the James Web Space Telescope set to launch in 2018.