Using water and a generator to create waves, astronomers have been able to gain valuable insights into how a particular phenomena known as superradiance affects particles around a black hole.

Rotational superradiance is a technical term for how waves behave when they hit an obstacle. If a wave hits a stationary obstacle, when it bounces away it will have less energy than before it hit the obstacle, because whatever got in its way takes some of that energy for itself.

However, if the obstacle is rotating – say for example a massive black hole – then the opposite can happen and the waves that are reflected can actually gain energy by extracting it from the obstacle they hit.

Wave scattering phenomena occur in almost all sciences, and although superradiance from an astrophysical perspective has been analysed in many theoretical scenarios, it has yet to be observed.

Now however, using a sophisticated ‘bath’ that is purposely designed to simulate black hole conditions, a team led by Silke Weinfurtner from the University of Nottingham have reported the first laboratory detection of the superradiance phenomena.

"Some of the bizzare black hole phenomena are hard, if not, impossible to study directly. This means there are very limited experimental possibilities. So this research is quite an achievement,” said Dr Weinfurtner.

The experiment, which started from the humble beginnings of a a bucket and bidet, has grown to a specially designed 3m long, 1.5m wide and 50cm deep bath with a hole in the centre. To mimic conditions around a black hole, water is pumped into a closed circuit to establish a rotating draining flow. Waves are then generated at varied frequencies and with the help of tiny dots of white paper used to measure the flow field - the speed of the fluid flow around the analogue black hole – the scattering effect is recorded using a specially designed 3D air fluid interface sensor.

In accordance with theory, the team observed that plane waves propagating on the surface of water were being amplified as much as 20 percent after being scattered by a draining vortex that was 6.25 centimetre deep fluid. Perhaps not quite on the scale of a black hole, but the same principles can be applied.

"This research has been particularly exciting to work on as it has bought together the expertise of physicists, engineers and technicians to achieve our common aim of simulating the conditions of a black hole and proving that superadiance exists. We believe our results will motivate further research on the observation of superradiance in astrophysics,” said Weinfurtner. 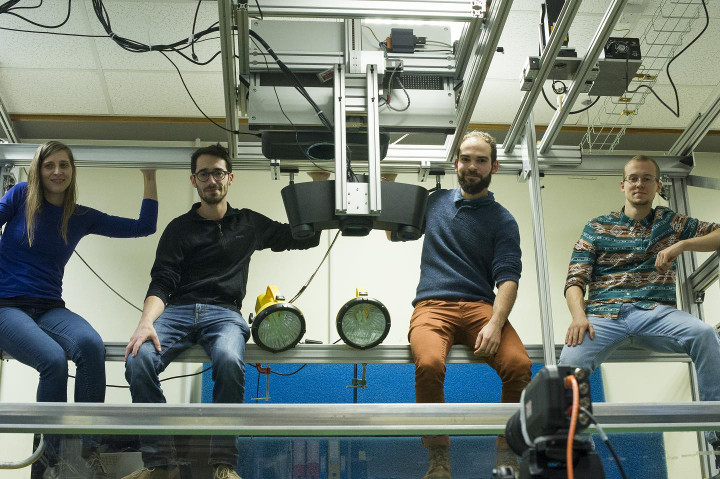 From left to right are: Dr. Silke Weinfurtner, Antonin Coutant, Theo Torres, and Sam Patrick. Image: The University of Nottingham