ESA, Airbus Defence and Space UK have signed a €229 million contract to build a satellite that will provide global maps of how much carbon is stored in the world’s forests and how this stock is changing over time. The Earth Explorer Biomass satellite is part of the Living Planet programme, an initiative designed to develop new and better instruments for observing Earth. Previous missions have included the GOCE gravity satellite, along with SMOS-ice, a campaign designed to use passive microwave radiometry in L-band to verify sea-ice forecasts and satellite-derived ice products.

Due for launch in 2021, the satellite will also utilise an active imaging technology that operates in the microwave portion of the electromagnetic spectrum, but this time it will use a P-band synthetic aperture radar to deliver accurate maps of temperate, tropical and boreal forest biomass.

The technology uses short pulses of emitted microwave energy to record the reflection from a given area on the ground. When it comes to mapping forest vegetation, the wavelength of the RADAR system will determine whether the synthetic aperture RADAR (SAR) backscatter is dominated by surface scattering or volume scattering.

While worldwide forest type and forest cover can be detected by today’s satellites, obtaining the global mass of trees is not possible by current ground measurement techniques. Biomass will therefore take the information to a different level by effectively ‘weighing’ the worlds forests over a 5 year period. Over this time, the satellite will witness at least eight growth cycles in the forest population thereby improving our understanding of the carbon cycle.

“Biomass is another one of those missions reaching the frontiers, technically speaking,” noted Volker Liebig, Director of ESA’s Earth Observation Programmes at the contract signing in Stevenage, UK. “Just like our other Earth Explorers, it is a first. It will be the first P-band radar instrument in space delivering information on the actual carbon mass in Earth’s forests, information that is fundamental for a better understanding of the carbon cycle and global biomass.” 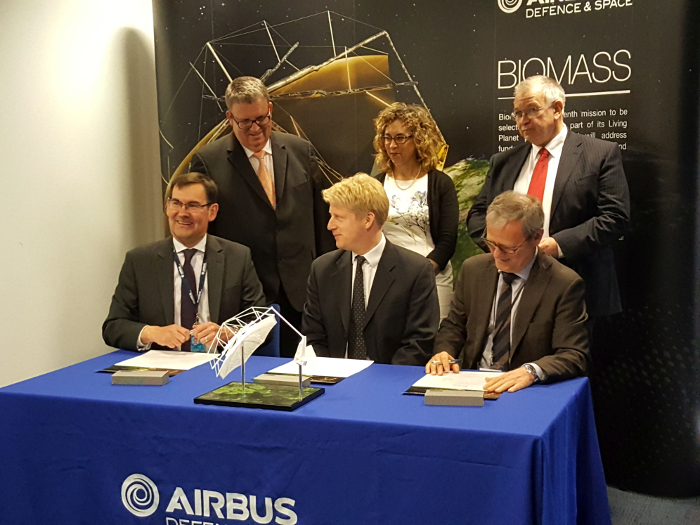 Signature of contract to develop the Biomass satellite by parties from Airbus UK, Space UK and ESA. Image credit: ESA

The radar will provide all-weather imaging from its near-polar, Sun-synchronous orbit as it flies at an altitude of 660 km. It will measure biomass at a resolution of 200 m and deforestation at 50 m to analyse how much carbon dioxide is being absorbed by the world's forests and to provide a better insight into rates of habitat loss and the possible subsequent effect this may have on biodiversity in the forest environment.

The satellite is also equipped with an experimental ‘tomographic’ phase, that can provide a 3D view of the forests as it maps the topography of forest floors. Along with other opportunities such as mapping the subsurface geology in deserts and movements of ice sheets, the data will support REDD+, a UN climate change initiative aimed at reducing emissions from deforestation and forest degradation.