Оnboard China’s SJ-10 satellite and launching today from China’s Jiuquan Satellite Launch Center (JSLC) site in the Gobi desert – are containers of a substance not usually associated with typical advanced spacefaring fuel. These containers contain highly pressurised crude oil and while it might seem a bizarre choice of cargo to send into orbit, they are part of an experiment designed to help improve our knowledge of oil reservoirs buried deep underground on Earth.

This program, know as the Soret Coefficient in Crude Oil experiment is a collaboration between ESA, China’s National Space Science Centre, France’s Total oil company and China’s PetroChina oil company and is designed to measure how hydrocarbon molecules redistribute when the temperature is not uniform. Understanding how complex liquids behave is of interest to not only the petroleum industry but also academia, and as these measurements can only be performed in weightlessness environments, the satellite will spend almost two weeks in orbit before it returns to Earth, allowing data to be collected that can model real-life conditions of oil reservoirs deep underground. 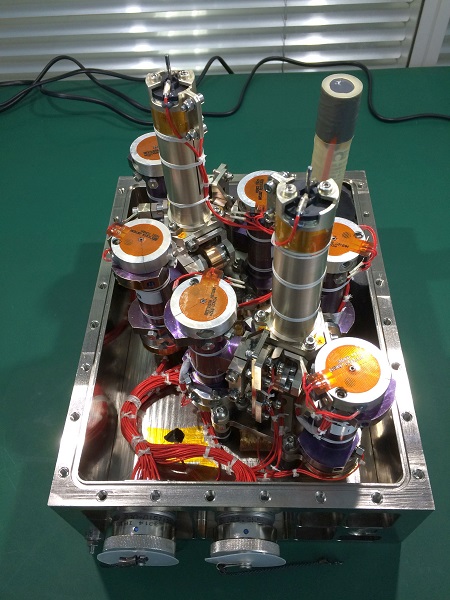 Set for launch on China’s SJ-10 satellite on 6 April 2016, the Soret Coefficient in Crude Oil experiment will measure how hydrocarbon molecules redistribute when the temperature is not uniform. The collated data will then be used to model real-life conditions of oil reservoirs deep underground. Image credit: ESA–A. Verga

“The experiment is designed to sharpen our understanding of deep crude oil reservoirs up to 8 km underground,” explains Antonio Verga, overseeing the project for ESA. “Imagine a packet of cornflakes – over time the smaller flakes drop to the bottom under gravity. On a molecular scale this experiment is doing something similar but then looking at how temperature causes fluids to rearrange in weightlessness,” says ESA’s Olivier Minster. “Deep underground, crushing pressure and rising temperature as one goes down is thought to lead to a diffusion effect – petroleum compounds moving due to temperature, basically defying gravity.” And like the cornflake analogy, over geological timescales, heavier deposits end up rising, while lighter ones sink. “The aim is to quantify this effect in weightlessness, to make it easier to create computer models of oil reservoirs that will help guide future decisions on their exploitation,” continues Minster.

Although the data collected will be used to model vast quantities of the black stuff, just one millilitre of crude oil in six small titanium cylinders, will be used in the experiment. Nonetheless, the oil will be compressed up to 500 times normal pressure at sea level on Earth, making it one of the highest-pressure items ever launched into space - a feat not to be taken lightly. As such, the sturdy cylinders were built to withstand more than double pressure than they will during normal operations – 1000 times atmospheric pressure.

Understandably then, the experiment has undergone intense testing, including vibration and shock testing to simulate launch and reentry as well as thermal cycling to reproduce the extreme changes in temperature the experiment will be subjected to during its orbits of Earth, to safeguard its success.