NASA has finished the construction of its Dellingr CubeSat nano-satellite, and has moved to the environmental testing phase. In this vital step, a satellite is tested to make sure it can withstand intense vibrations, extreme temperatures, and magnetic fields that it will encounter during launch and in space.

The Dellingr CubeSat will study the ionosphere - the outer region of Earth’s atmosphere populated by charged particles, ionized by incoming solar radiation and magnetospheric particle precipitation. Named after the Norse god of dawn, Dellingr is barely bigger than a cereal box and is capable of carrying three payloads – a miniaturized mass spectrometer and two no-boom magnetometer systems. The mini satellite will use this technology to create a chemical and electromagnetic profile of the Earth's outer atmosphere. 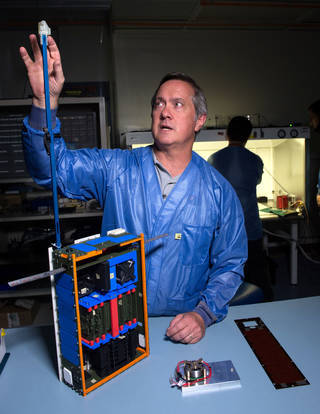 Dellingr Project Manager Chuck Clagett points to the CubeSat’s boom, at the end of which is a magnetometer, an instrument that takes measurements of its magnetic surroundings. Dellingr also carries two no-boom magnetometers, a first for such miniature satellites. Credits: NASA's Goddard Space Flight Center/Bill Hrybyk

Small satellites, including CubeSats, are playing an increasingly larger role in exploration, technology demonstration, scientific research and educational investigations at NASA, including: planetary space exploration; Earth observations; fundamental Earth and space science; and developing precursor science instruments like cutting-edge laser communications, satellite-to-satellite communications and autonomous movement capabilities. CubeSats are considered “nanosatellites”, and are measured in Units of 10x10x11. CubeSats can be 1U, 2U, 3U or 6U in size and normally weigh less than 1.3 kg per Unit. The Dellingr CubeSat is a 6U satellite. CubeSats are most often flown as auxiliary payloads on planned missions.