Firing nuclear missiles at a late-spotted Earth-bound asteroid would be effective in stopping the majority of the rocky body hitting our planet, a new study by US scientists says.

Every day, Earth is bombarded with more than 100 tons of dust and sand-sized particles that have originated from beyond our planet. Every 2,000 years or so, a meteoroid the size of a football field hits Earth and causes significant damage to the area.

Thankfully for humanity, only once every few million years does an object large enough to cause catastrophic damage make a collision course with Earth.

But what if that time was now? What would humans do if scientists spotted a 100-meter (328-foot) wide asteroid on a direct path to Earth?

In an ideal scenario, scientists would prefer to gently nudge the space rock out of the away with a kinetic impactor.

This method is called deflection and involves a transfer of momentum from the impactor to the asteroid, which causes a change in velocity, making the asteroid deviate from its course.

This technique is well-known and will be the focus of real targets when NASA’s DART mission reaches its target – a binary asteroid system comprised of Didymos and its small moonlet asteroid Dimorphos – in late 2022.

However, this method needs time to be implemented, so if a large asteroid was detected with just a couple of months, or less, to go before its impending strike, a successful deflection might not be possible.

In that case, what are the alternatives? It turns out initiating a nuclear blast close to an asteroid could actually work.

Breaking up a large rocky body into fragments before it hits Earth is known as disruption and was a scenario made popular by the film Armageddon; a disaster movie that centres around a crew of oil drillers sent to space to stop a meteor hurtling toward earth by blowing it up with a nuclear bomb.

While the film is fictional, using a nuclear bomb to disrupt an asteroid is not as far-fetched as it sounds, say a team of scientists who have modelled how fragments from an asteroid behave after it comes into close contact with a 1-Megaton-yield device.

Unlike Armageddon, the size of the asteroid modelled in the study is 100 meters wide (approximately 1/5 the scale of Bennu) and not the size of Texas. The nuclear bomb also does not need to be drilled into the rock, but is exploded a few meters from its surface.

“If we spotted a hazardous object destined to strike the Earth too late to safely divert it, our best remaining option would be to break it up so thoroughly the resulting fragments would largely miss the Earth,” says J Michael Owen, a co-author of the research paper recently published in Acta Astronautica.

But its still complicated, says Owen. Owen, who is based at Lawrence Livermore National Laboratory in California wrote Spheral, the software used to model the nuclear disruption of the asteroid featured in the team’s simulations.

“If you break up an asteroid into pieces, the resulting cloud of fragments will each pursue their own path around the sun, interacting with each other and the planets gravitationally. That cloud will tend to stretch out into a curved stream of fragments around the original path the asteroid was on. How quickly those pieces spread out (combined with how long until the cloud crosses Earth's path) tells us how many will strike the Earth.”

The team specifically focused on studying ‘late’ disruptions, meaning that the impacting body is broken apart shortly before it impacts.

For all five asteroid orbits considered, say King and colleagues, carrying out the disruption just two months before the Earth impact date was able to reduce the fraction of impacting mass by factor of 1,000 or more (99.9 percent of the mass misses Earth).

For a larger asteroid, more time is needed, say the team. Dispersal velocities could still be reduced by an order of magnitude and 99 percent of the mass would still miss Earth, but disruption needs to staged at least six months ahead of the impact date.

Kinetic impactors have many advantages but they do have some limitations, say the team, so it is important that if an actual emergency does arise that multiple options are available to deal with a threat, including some ways that can handle pretty short warning times.

“One of the challenges in assessing disruption is that you need to model all of the fragment orbits, which is generally far more complicated than modeling a simple deflection,” says King. “Nevertheless, we need to try to tackle these challenges if we want to assess disruption as a possible strategy.” 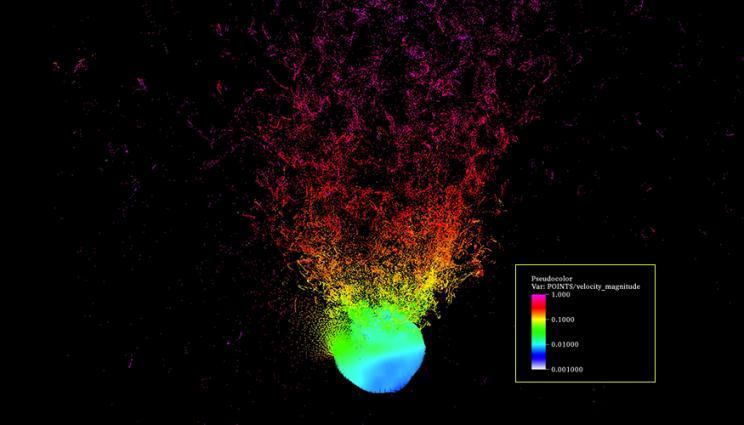 The hydro simulation in Spheral that provided the basis for the analysis: 1 Megaton at a few meters standoff distance from a 100-metre diameter asteroid (with Bennu shape). Colours denote velocities. The legend is cm/us, which is equivalent to 10 km/s.