ESA investigates health risk of living on the Moon

With a renewed interest in setting up a lunar base for mining purposes and as a platform for launching interplanetary missions to Mars and beyond, the Moon is back in fashion again. But just how safe would it be to live on our nearest neighbour? Perhaps not very safe at all it would seem.

When the Apollo astronauts returned from the Moon, they experienced a number of physiological effects such as sore throats and watering eyes - symptoms that soon earned the title of “lunar hay fever.”

The culprit? As a barren, practically airless world, clearly it could not be the result of any of the pollen-producing organisms typically found on Earth, so what was it? Moon dust. The moon dust that had clung to the spacesuits of all 12 people who have stepped on the lunar surface made the astronauts sneeze and gave them nasal congestion for days afterwards, while it also gave off an acrimonious stench that made the inside of the spacecraft smell like burnt gunpowder.

Fine like powder, but sharp like glass, lunar dust is made of sharp, abrasive and nasty particles with a high silicate content. And unfortunately for the first space pioneers, the low gravity of the Moon allows the tiny particles to stay suspended for longer, making them easier to penetrate more deeply into the lung.

The situation is not unique to the Moon; miners working in comparative environments on Earth often suffer from inflamed and scarred lungs from inhaling silicate. On the Moon though, not only are your lungs not safe, but neither is your clothing as the caustic effect of the dust also ate away layers of spacesuit boots and destroyed the vacuum seals of Apollo sample containers.

To assess just how hazardous lunar dust is for humans on a long-stay mission to the Moon, ESA are conducting an ambitious research programme with experts from around the planet to address this issue.

“We don’t know how bad this dust is. It all comes down to an effort to estimate the degree of risk involved,” says Kim Prisk, a pulmonary physiologist from the University of California with over 20 years of experience in human spaceflight – one of the 12 scientists taking part in ESA’s research.

So far however, studies into the biological effects of the dust paint a rather grim picture for anyone considering an extended work-trip on the Moon, as research shows that lunar soil simulants can destroy lung and brain cells after long-term exposure.

“Particles 50 times smaller than a human hair can hang around for months inside your lungs. The longer the particle stays, the greater the chance for toxic effects,” explains Kim.

If that wasn’t bad enough, because the Moon has no atmosphere and is constantly bombarded by radiation from the Sun, it causes the soil to become electrostatically charged. This charge can be so strong that the dust particles are prone to levitating above the lunar surface, making them even more likely to infiltrate equipment and people’s lungs.

Off-world studies are also being conducted and currently astronaut Alexander Gerst is running a session of the Airway Monitoring experiment on board the International Space Station to monitor lung health in reduced gravity. The experiment measures the level of nitric oxide – a naturally occurring molecule produced in the lungs – in the visiting astronauts’ lungs. Although small amounts are normal and help to regulate blood flow, excess levels indicate airway inflammation caused either by diseases like asthma or environmental factors such as dust and pollutants.

But there is some good news, if the dust doesn’t kill you first, then you can heat it up to produce bricks that can offer shelter for astronauts, while oxygen can be extracted from the soil to sustain human missions on the Moon, explains science advisor Aidan Cowley. 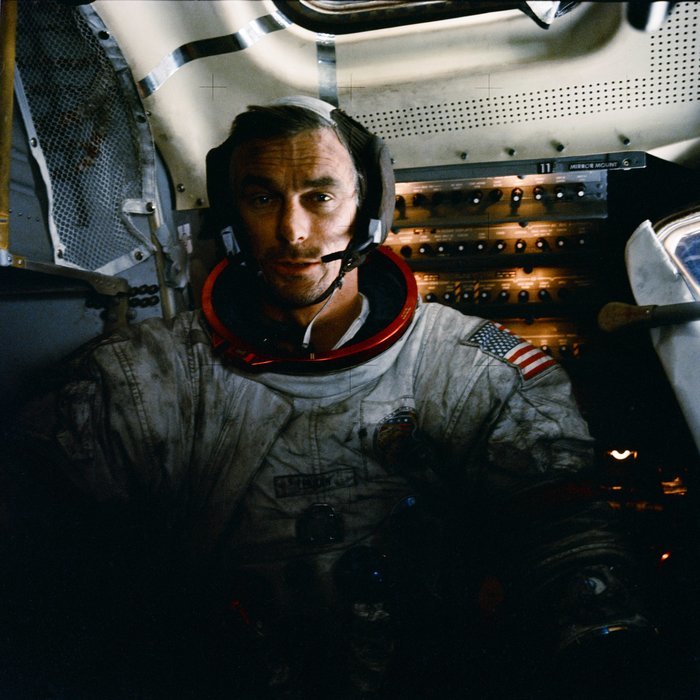 NASA astronaut commander Eugene Cernan inside the lunar module on the Moon after his second moonwalk of the Apollo 17 mission, with his spacesuit covered with lunar dust. Image: NASA