Earth is being bombarded by an influx of high-energy positrons, but why is still a matter of debate and now, a leading candidate that was once used to explain this excess in antimatter particles is now being ruled out.

Positrons are subatomic particles with the same mass as an electron but instead have a positive charge, I.e they are the antiparticle (or antimatter) counterpart to the electron (which has a negative charge) and when the two collide, they are both annihilated.

Positrons are produced naturally in beta decays of naturally occurring radioactive isotopes, such as potassium-40, however they are also found in cosmic rays, and astronomers have long been intrigued by why there are far more high-energy positrons in cosmic rays than is expected by current theoretical models.

Cosmic rays are made up of atomic nuclei – most of which are hydrogen nuclei – that travel at the speed of light and currently, there are several ground-based projects trying to decipher more about where these antielectrons originate from.

One of which is the High-Altitude Water Cherenkov Gamma-Ray Observatory (HAWC) detector in Mexico. As the name implies HAWC consists of 300 water tanks housed on the slopes of the Mexican volcano Sierra Negra. At an altitude of over 4100 metres above sea level, these detectors are sensitive to fleeting flashes of light known as Cherenkov radiation, that have energies from 100 gigaelectronvolts (GeV) to 100 teraelectronvolts (TeV).

The observatory has recently been used by an international team of astronomers to test whether the excess of positrons arriving at Earth, started life in a number of near-by pulsars.

"We know that high-energy particles of cosmic rays, travelling through our galaxy, quickly dissipate their energy by interacting with other radiation and magnetic fields. This is how particles of primary cosmic rays behave. Positrons are secondary, they come from interactions in which primary radiation is involved. We would therefore expect a similar dependence: a marked decrease in the number of high-energy positrons," explains Professor Sabrina Casanova from The Institute of Nuclear Physics Polish Academy of Sciences.

"The reality is different. Satellite and terrestrial observatories record many more high-energy positrons than they should. Our aim was to check whether the source of the positron excess was astronomical objects in our vicinity, such as pulsars and their surrounding nebulae,” added Casanova.

After 17 months of searching, it turns out pulsars and their surrounding nebulae are indeed responsible for some of the positrons in the cosmic rays, however, not nearly enough were found to account for the numbers of TeV positrons bathing our planet.

"Since the involvement of close-by pulsars in the generation of high-energy positrons reaching us is so modest, other explanations become more and more likely,” said Casanova.

What could the cause possible be? The most interesting hypothesis at the moment, is that the excess positrons are being produced from the decay or annihilation of dark matter. If this turns out to be true, then these surplus subatomic particles would be the first particles recorded by humans to be derived from the interaction of dark matter.

This theory however, will require many more observations yet to confirm if this is indeed the case or not. 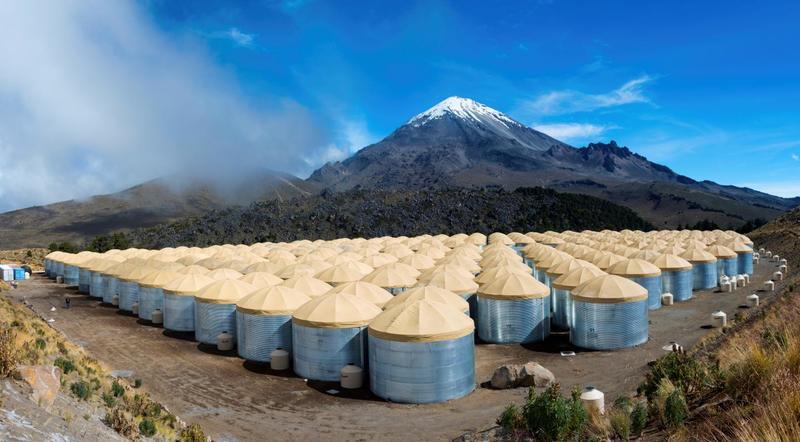 An image of the HAWC detector consisting of 300 large (188,000 liter/50k gallon) water tanks, each with 4 photodetectors. HAWC is located at an altitude of 4100 m above sea level inside the Parque Nacional Pico de Orizaba, in Mexico. Image: Jordan A. Goodman