Step by step, the secrets of the colossal but invisible objects that ‘hide’ in the centre of galaxies, black holes, are slowly being given up. First LIGO spotted signs of a collision between two of these behemoths, then just last month astronomers saw the unseeable to produce the first ever picture of a dark, looming mass that was so huge our Solar System could have fit in its cavernous opening. Now, closer to home, researchers have been able to shed a different type of light on our own supermassive black hole to reveal a never-before-seen disk of cold, interstellar gas wrapped around its periphery.

Known as Sagittarius A* (A “star”), our resident SMBH is around four million times the mass of our Sun and lies approximately 26,000 light-years from Earth in the centre of our Milky Way. Although we cannot actually see it, its presence is inferred from a ring of extremely fast moving material that was seen racing around near its event horizon at about 30 percent the speed of light by ESO’s GRAVITY instrument last year.

It is estimated that the temperatures reached by this turbulent, spiralling belt of gas can reach as much as a scorching 10 million degrees Celsius (18 million degrees Fahrenheit), or about half the temperature found at the core of our Sun. At these blistering temperatures, high-energy radiation in the form of X-rays are emitted which can be picked up by space-based X-ray telescopes as close as a tenth of a light-year away from the black hole.

Perhaps surprisingly, amid this fiery and violent environment, a vast store of comparatively cooler hydrogen gas within few light years around the black hole is known to exist, however little else was known about it except that it was there.

Its presence was also given away by radiation, but instead of X-rays, the hydrogen atoms in this nebulous ring of material give off radio waves - millimetre wavelength radiation that occurs when the atoms are continually stripped of their electrons and later recombined with any free ones floating around.

Specifically built to detect signals such as these, the Atacama Large Millimeter/submillimeter Array (ALMA) was able to detect this faint radio radiation as it travelled to Earth relatively unhindered, and have produced the first-ever image of the cooler gas disk surrounding the Milky Way’s supermassive black hole. Not only that, but it captured it at only about a hundredth of a light-year away from Sag A*, or about 1000 times the distance from the Earth to the Sun.

What exactly the interplay is between this gas and the monster-material eating machine at the heart of the galaxy is still not determined, but researchers have been able to estimate that the amount of hydrogen in this cold disk is about one-tenth the mass of Jupiter or to put it another way, one ten-thousandth of the mass of the Sun.

“We were the first to image this elusive disk and study its rotation,” said Elena Murchikova, a member in astrophysics at the Institute for Advanced Study in Princeton, New Jersey. “This is important because this is our closest supermassive black hole.”

Still, the matter of how black holes siphon off material from their surroundings to devour it, a process known as accretion, is still something of a stumbling block. We still have no good understanding of how accretion works for black holes said Murchikova, but we hope these new ALMA observations will help uncover this fascinating process, she concluded. 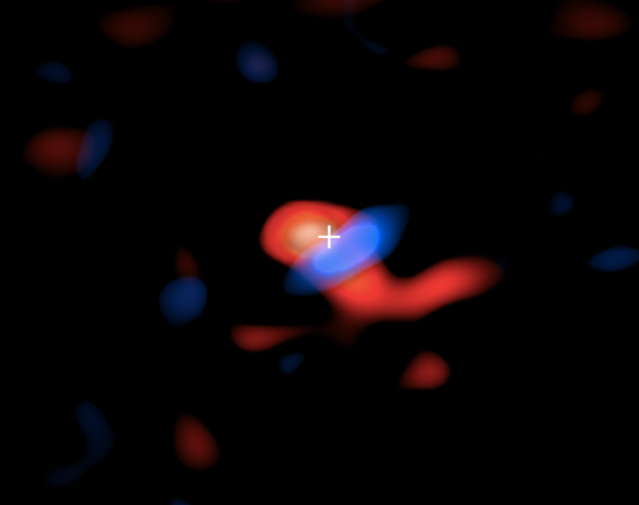 ALMA image of the disk of cool hydrogen gas flowing around the supermassive black hole at the center of our galaxy. The colors represent the motion of the gas relative to Earth: the red portion is moving away, so the radio waves detected by ALMA are slightly stretched, or shifted, to the “redder” portion of the spectrum; the blue color represents gas moving toward Earth, so the radio waves are slightly scrunched, or shifted, to the “bluer” portion of the spectrum. Image: ALMA (ESO/NAOJ/NRAO), E.M. Murchikova; NRAO/AUI/NSF, S. Dagnello