Saturn’s Moon Titan captured the imagination of enthusiasts everywhere when Cassini and the Huygens probe beamed back pictures of a world littered with mountains and lakes due to its active methane-based hydrologic cycle. But like Venus, the moon’s thick, hazy atmosphere has so far hindered many of its geological features at visible wavelengths.

Now, for the first time, scientists have presented the first global geological map of Titan to show just how diverse the terrain is of the Solar System’s second-largest natural satellite.

Despite its moon designation, Titan is frequently described as a planet-like moon. This is because, apart from it being the only moon known to have a dense atmosphere – it is denser than Earth’s – it is also the only known body in space, other than our planet, where clear evidence of stable bodies of surface liquid has been found.

Unlike Earth though Titan is not filled with lakes and pools of water. Instead the compound which shapes the moon’s surface in a hydrologic cycle that matches our own is methane (CH4).

On Earth, this hydro-carbon molecule is pumped out in vast quantities each year due mostly to human activity; think livestock, waste, burning of fossil fuels – all of which accounts for about 60 percent of global methane emissions. On Titan however, methane is most likely to be expelled into the atmosphere via eruptions from cryovolcanoes.

The possibility of a feature-rich landscape and hydrocarbon seas on Titan was first suggested based on data obtained by Voyager 1 and 2 as they whizzed by on their tour of the Solar System.

This was backed up in 1995 when data from Hubble and other observations suggested the existence of liquid methane on Titan. Since then, a number of organic molecules such as tholins and polycyclic aromatic hydrocarbons (PAHs) have been found on Titan, leading some to suggest that Titan might have resembled our planet in the earliest stages of its existence.

This comparison is now even more apt, as Rosaly Lopes at the Jet Propulsion Laboratory, Pasadena, and colleagues have now been able to identify six major geological forms and determine their relative age and distribution across the globe using radar and infrared data from the Cassini orbiter spacecraft.

Lopes and colleagues work indicates that Titan’s geology depends strongly on latitude. The youngest terrains are dune fields that dominate the equator, and lakes (and seas) and labyrinth units that are concentrated at the poles.

Labyrinth units have morphologies similar to karstic terrains on Earth, which are formed from the dissolution (dissolving) of limestone, dolomite, and/or gypsum.

Because there is no contact between lakes and dunes, say Lopes and colleagues in their new paper recently submitted to Nature Astronomy, it is not possible to distinguish the relative ages of these units. It is also likely that given the active seasonal weather patterns found on Titan including wind and rainfall, the chances are these features are still in the midst of forming and changing.

Meanwhile, some of the oldest terrains are mountainous regions that stretch a few to tens of kilometres in length and up to a couple of kilometres high, that may have formed by contractional tectonism early in Titan’s history.

Also doted about are smaller but equally lumpy hummocky regions. The largest hummocky outcrop is in the equatorial region known as Xanadu; a highly reflective area about as big as Australia on the leading hemisphere of Titan.

“These observations demonstrate the extent to which Titan is shaped by its methane cycle. The poles are humid enough to keep liquid bodies of methane, whereas the arid equatorial climate keeps wind-shaped dunes intact,” say Lopes and colleagues. “The clear distinction between these units and where they are found on Titan indicates that a variety of processes must be acting on the surface of this moon, controlled by climatic, seasonal and elevational conditions,” conclude the authors. 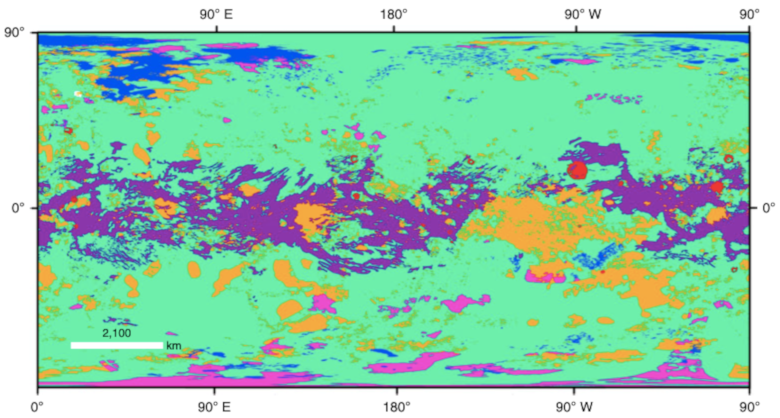