Last month, news broke that an asteroid from a far-off system space was making a brief visit to our own solar neighbourhood - the first time that such an event had been recorded.

In the weeks that followed scientists scrambled to the telescopes to get a better look at the interstellar interloper and observations now show that this unique object appears to be a dark, reddish, highly-elongated (around 400 metres long) rocky or high-metal-content body, that has been traveling through space for millions of years before its chance encounter with the Sun.

Known as 1I/2017 U1 (`Oumuamua) or just `Oumuamua for short, the object, first detected by the Pan-STARRS 1 telescope in Hawaii, was initially thought to be a typical home-grown fast-moving small asteroid, but further observations over the next few days revealed a very surprising insight; this rocky body did not originate from inside the Solar System.

As `Oumuamua had already passed its closest point to the Sun in September, astronomers had to act quickly to learn as much as possible about the object before it disappeared off again. One telescope to get a good look at `Oumuamua – an Hawaiian name meaning ‘scout’ – was ESO’s Very Large Telescope (VLT). Observations show that `Oumuamua varies dramatically in brightness by a factor of ten as it spins on its axis every 7.3 hours.

“This unusually large variation in brightness means that the object is highly elongated: about ten times as long as it is wide, with a complex, convoluted shape,” explains team leader Karen Meech, from the Institute for Astronomy, Hawai`i. “We also found that it has a dark red colour, similar to objects in the outer Solar System, and confirmed that it is completely inert, without the faintest hint of dust around it.”

These features suggest that `Oumuamua is dense, and lacks significant amounts of water or ice. It is likely that its dark surface is now reddened due to the effects of irradiation from cosmic rays as it has been traversing interstellar space.

In fact our Solar System could be the first star system that `Oumuamua has closely encountered since it set off from its own birth star system millennia ago. It is thought that `Oumuamua appeared roughly from the direction of the star Vega in the northern constellation Lyra, however, given the length of time the odd-shaped asteroid has been on its travels and even travelling at a breakneck speed of about 95 000 kilometres per hour, it took so long for the interstellar object to make its journey here, that Vega was not near that position when the asteroid was there about 300 000 years ago.

“We are continuing to observe this unique object,” concludes Olivier Hainaut, “and we hope to more accurately pin down where it came from and where it is going next on its tour of the galaxy. And now that we have found the first interstellar rock, we are getting ready for the next ones!”

Now that telescopes such as Pan-STARRS are powerful enough to detect objects like `Oumuamua and with estimates that interstellar asteroids pass our borders approximately once a year, it is likely that `Oumuamua will be the first in a long line of visitors from out of town that we know about. 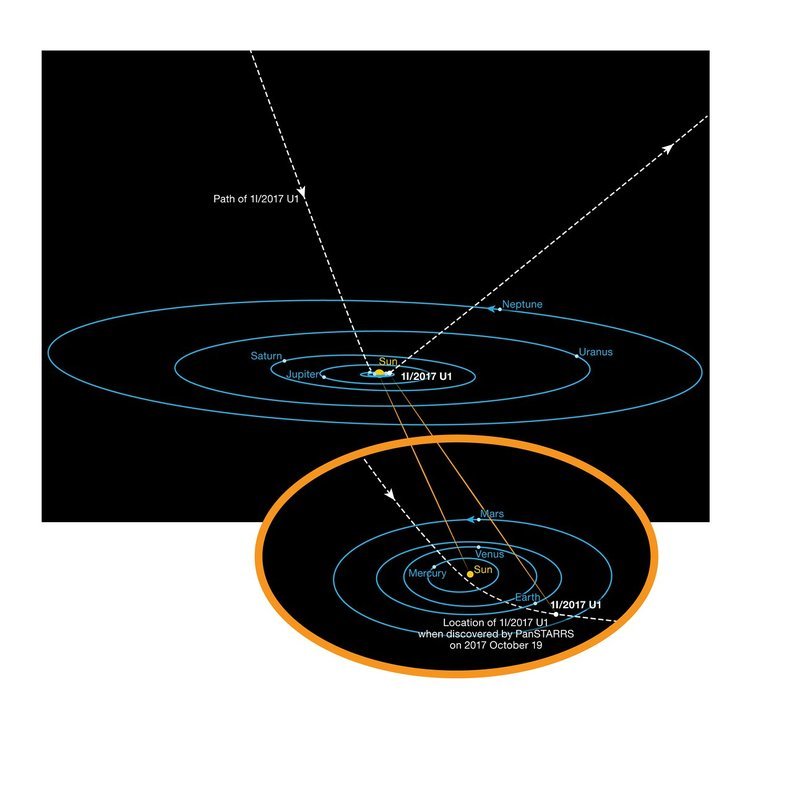 This diagram shows the orbit of the interstellar asteroid ‘Oumuamua as it passes through the Solar System. Unlike all other asteroids and comets observed before, this body is not bound by gravity to the Sun. Image: ESO/K. Meech et al.