Touchdown! The Japanese spacecraft Hayabusa2 which has been in orbit around the near-Earth asteroid Ryugu since June, has successfully deployed two small rovers that have landed safely on its surface.

The small, round, delicate-looking probes made a 60 metre leap from their parent craft onto Ryugu's rocky surface to become the first-ever rovers to land on an asteroid. And, clearly not as fragile as they look, at least one of the rovers is reported to be on the move.

“I cannot find words to express how happy I am that we were able to realize mobile exploration on the surface of an asteroid. I am proud that Hayabusa2 was able to contribute to the creation of this technology for a new method of space exploration by surface movement on small bodies,” said Yuichi Tsuda, Project Manager for Hayabusa2.

The rovers, collectively named MINERVA-II1 – which stands for the “MIcro Nano Experimental Robot Vehicle for Asteroid” – have been stowed away on the bottom of Hayabusa2 during its long journey to this carbon-rich, diamond-shaped asteroid that is a kilometre in diameter.

The asteroids new inhabitants weigh just over 1 kilogram, stand seven centimetres (cm) in height and have a diameter of 18cm. Without a bulky, tank-like tread to move around on, the rovers instead are designed to ‘hop’ around the surface by way of an internal rotating motor that causes the rover to jump up ("hop") during the rebound.

This type of transport has been adapted to benefit from the asteroid’s weak gravity and a hop on Ryugu is expected to last for around 15 minutes. During which time it will have propelled the probe 15 metres along the surface.

“With the image taken during the hop on the asteroid surface, I was able to confirm the effectiveness of this movement mechanism on the small celestial body and see the result of many years of research,” said Tetsuo Yoshimitsu, a leader on the MINERVA-II1 project.

Packed with seven cameras between them, the rovers job is to create a stereo image of the surface of Ryugu, along with measuring its temperature, rotational motion, and acceleration forces.

After billions of years of solitude, the surface of Ryugu is soon to get a little busier as two further rovers, MINERVA-II2 and MASCOT, are scheduled to join their fellow trailblazers in the coming months; all of this before the spacecraft completes its primary goal of returning a sample from the surface of the asteroid back to Earth in 2020. 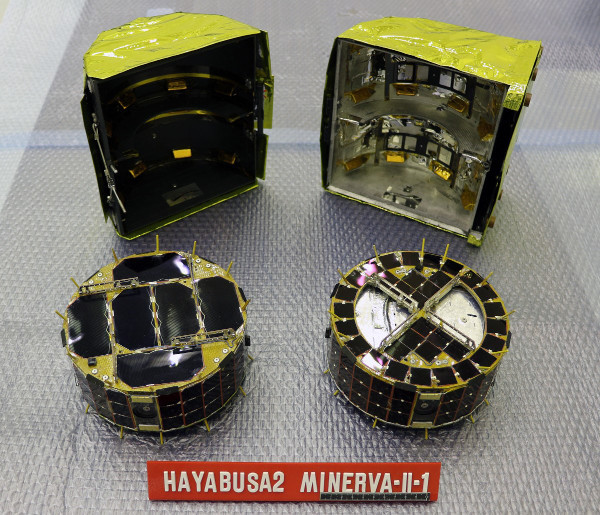 The small rovers, MINERVA-II1. Rover-1A is on the left and Rover-1B is on the right. Behind the rovers is the cover in which they are stored. Image: JAXA.