Two different teams of astronomers have not only detected light from the first stars that shone in the Universe but have also unexpectedly stumbled upon "dark matter,” the mysterious matter that does not absorb, reflect or emit light and is roughly six times more abundant than the visible material we see around us.

This prodigious breakthrough is even more remarkable, because the detection was made not with a large array of telescopes but with a radio antenna not much larger than a refrigerator.

The signal, which has left its imprint in the cosmic microwave background (CMB) – the background electromagnetic radiation that permeates the Universe – confirms that the ancient suns were active within 180 million years of the Big Bang.

"Finding this minuscule signal has opened a new window on the early universe," says astronomer Judd Bowman of the University of Arizona, the lead investigator on the project.

It has long been suspected that the first stars would be massive and therefore short-lived. As such optical telescopes would struggle to see any light that was emitted from these behemoths before they likely exploded as supernovas. So astronomers looked to other means in which to identify the light.

Previous research had indicated that the first stars would have released tremendous amounts of ultraviolet (UV) light and that this light could have interacted with free-floating hydrogen atoms. These atoms also began to absorb surrounding CMB photons causing a small dip in its intensity, a feature that would be noticeable in the CMB signals that eventually reached Earth.

"Telescopes cannot see far enough to directly image such ancient stars, but we've seen when they turned on in radio waves arriving from space,” added Bowman.

However distinguishing these signals from the medley of radio-signals that are produced by the inhabitants of our planet, is like trying to hear the flap of a hummingbird's wing in the middle of a hurricane, commented Peter Kurczynski, program director for the National Science Foundation (NSF).

The NSF funds the Experiment to Detect the Global EoR (Epoch of Reionisation) Signature (EDGES) project, the antenna which detected this archaic signal and an instrument that looks much like a glass table randomly placed in the outback of Western Australia.

Detecting the signal is cause enough for celebration, however an unanticipated result gleaned from the data suggests that something else might be at play too. The signal that Bowman’s team untangled was twice as intense as models had predicted, suggesting that either the hydrogen gas so soon after the Big Bang was colder than expected or that background radiation levels were significantly hotter than the photons of the CMB.

One striking possibility is that dark matter interactions may explain the effect. "I realised that this surprising signal indicates the presence of two actors: the first stars, and dark matter," says Professor Rennan Barkana of Tel Aviv University. “The first stars in the Universe turned on the radio signal, while the dark matter collided with the ordinary matter and cooled it down. Extra-cold material naturally explains the strong radio signal."

This says Prof. Barkana, is proof that dark matter exists and that it is composed of low-mass particles. "If that idea is confirmed," Bowman says, "then we've learned something new and fundamental about the mysterious dark matter that makes up 85 percent of the matter in the universe. This would provide the first glimpse of physics beyond the standard model."

"This discovery opens a new chapter in our understanding of how the world we see came into being," Kurczynski says. "With an antenna not much different than an FM radio's, and a great deal of care and ingenuity, the researchers saw something not yet detected by interferometers requiring hundreds of antennas, complex data processing and hundreds of observing hours. Indirectly, they have seen farther than even the Hubble Space Telescope to find evidence of the earliest stars." 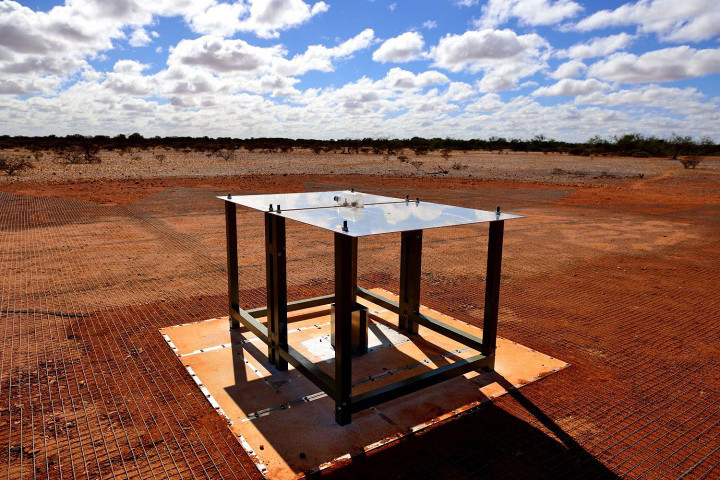 The EDGES instrument at the Murchison Radio-astronomy Observatory, Australia. In each instrument, radio waves are collected by an antenna consisting of two rectangular metal panels mounted horizontally on fiberglass legs above a metal mesh. Image: CSIRO Australia.