Multi-planet system hints at extra planet in its cometary belt

In a region analogous to our own Kuiper belt, astronomers have made the first high-resolution image of a cometary belt around HR 8799, a young main-sequence star located 129 light years from Earth and the only star where multiple planets have been imaged directly, in order to study the geometry of the system and to look for asymmetries in the disc.

The image, made with Atacama Large Millimeter/submillimeter Array (ALMA), shows that the debris disk has an irregular inner edge and has been interpreted as either a sign that the orbit of the outermost planet (Planet b) has changed over time, or more tantalising, that at least one more planet is hiding in the system. Either way, although many systems have been discovered that are host to both a debris disc and planets, there are very few resolved images showing the interplay between the two. This image is therefore a boost for astronomers hoping to understand how planets and debris discs interact.

"This data really allow us to see the inner edge of this disk for the first time," explains Mark Booth from Pontificia Universidad Católica de Chile and lead author of the study. "By studying the interactions between the planets and the disk, this new observation shows that either the planets that we see have had different orbits in the past or there is at least one more planet in the system that is too small to have been detected."

HR 8799 is a member of the Lamda Boötis (λ Boo) class and detailed analysis of the star's spectrum reveal, that compared to the Sun, it has a slight overabundance of carbon and oxygen (by approximately 30% and 10% respectively). Models constructed of the discs geometry made from previous observations taken with the Spitzer Space Telescope imply that the disc consists of an inner asteroid belt analogue, a planetesimal belt between 100 and 310 AU and a blowout grain halo going out to at least 1500 AU. This model is also strengthened by deep observations using Herschel and it is surmised that the disc is produced by the ongoing collisions of cometary bodies in the outer reaches of this star system. 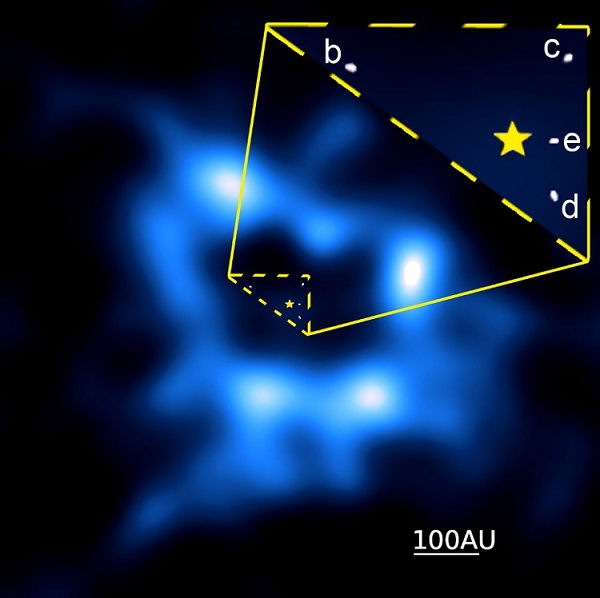 ALMA image of dusty cometary ring around HR 8799, the only star where multiple planets have been imaged. The new data suggest the planets either migrated or another undiscovered planet is present. The zoom-in portion of the image, taken with ESO's Very Large Telescope, shows the location of the known planets in this system in relation to a graphical representation of the central star. Credit: Booth et al., ALMA (NRAO/ESO/NAOJ); A. Zurlo, et al

According to the researchers, the millimeter-size dust grains in the disc, whose size was determined from their emission spectra taken with ALMA, suggest that the planets in the system are larger than Jupiter. "This is the very first time that a multi-planet system with orbiting dust is imaged, allowing for direct comparison with the formation and dynamics of our own Solar System," explains Antonio Hales, co-author of the study from the National Radio Astronomy Observatory in Charlottesville, Virginia.

Despite being a well-studied system, it is clear that the HR 8799 system needs further observations to distinguish if the fragmentary disk edge is a result of a more complicated dynamical history or is influenced by an extra planet beyond the orbit of planet b.