Musk sets pace in the race to Mars

From the same pad where NASA launched rockets that carried astronauts to the Moon and Space Shuttle crews into Earth orbit a big, new American rocket arced into space on Tuesday. But this time NASA was not involved. The rocket, the Falcon Heavy (in essence three smaller Falcon 9's strapped together) was built by SpaceX, the company founded and run by the billionaire entrepreneur Elon Musk.

Viewed from the Press Centre near the giant countdown clock the Falcon Heavy cut an imposing figure across the Cape Canaveral landscape as it awaited lift-off after a tense series of delays due to strong winds high in the atmosphere.

The launch attracted thousands of sightseers, crowds not seen since NASA's last space shuttle flight seven years ago. Scores of journalists packed the space centre to witness not only the launch but also the return to land of two of the Heavy's three first-stage boosters, strapped on the rocket’s side for takeoff.

The mission was flawless, a triumph for SpaceX and its cheering employees. The business model of SpaceX is to drive down launch costs and make space affordable and to that end all three main rocket cores are reusable. Perfectly synchronised, the outer cores landed back at Kennedy Space Center.

Just a few years ago the notion of re-landing reusable rockets seemed like a pipe dream and yet SpaceX has made it routine, with regular landings on land and on a drone ship floating in the Atlantic Ocean.

The experimental rocket also carried a playful and unusual payload: Mr Musk’s red Roadster, an electric sports car built by his other company, Tesla. Strapped inside the car was a dummy wearing a SpaceX spacesuit and soon after launch social media was alive with pictures of the car in orbit around Earth before it was boosted out into the solar system.

It’s difficult to overstate what SpaceX has accomplished. The successful introduction of a new heavy rocket to the world, the most powerful in operation and second only to the Apollo era, all through a private company and at a fraction of a cost of other systems currently in construction.

But this was just a first step because the ultimate ambition of Elon Musk is to take people back to the Moon and on to Mars.

The Falcon Heavy's specs are impressive. The three-core rocket boasts 27 engines (more than any other working rocket has used before) which together provide more than 5 million pounds of thrust at liftoff, allowing the vehicle to put more than 140,000 pounds of cargo into low Earth orbit.

Though it is not as tall or wide as United Launch Alliance’s Delta 4-Heavy, it has more than twice the capability of any rocket currently on the market and almost as much as NASA's new SLS launcher.

NASA's giant rocket certainly has its share of problems. It could still be years from making its first flight and probably won't carry a crew until at least 2022. Some estimates show that SLS may cost more than 10 times as much to fly as the Falcon Heavy.

On the road to Mars and in the wake of this high profile success serious questions now lie ahead for both NASA and the US taxpayer. 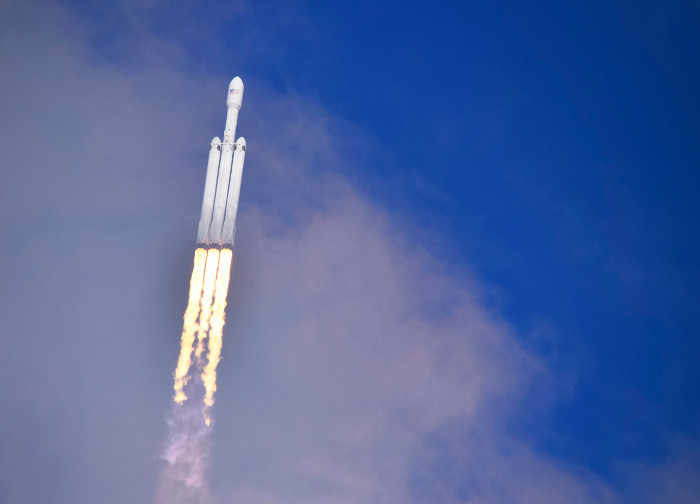