In a much anticipated press conference on February 22, 2017, NASA has announced the discovery of seven new Earth-size planets located in the TRAPPIST-1 system.

Exciting news from NASA today, as the agency announces the discovery of seven Earth-size planets located in the TRAPPIST-1 system, three of which are in the so-called Goldilocks zone – part of the system most likely to host planets with liquid water.

The exoplanet system, named after the Transiting Planets and Planetesimals Small Telescope (TRAPPIST) in Chile, is located in the Aquarius constellation, which is about 40 light years (235 trillion miles) away from Earth. TRAPPIST had discovered the first three planets in the system in May of 2016. Now, the European Southern Observatory's Very Large Telescope, Spitzer, has discovered the rest – bringing the total number of exoplanets in TRAPPIST-1 up to seven.

The project team was able to measure the mass and size of each planet and subsequently calculate their densities, discovering that the planets are likely to be rocky. Further observations are still needed to figure out whether the planets could have liquid water on their surfaces.

"The seven wonders of TRAPPIST-1 are the first Earth-size planets that have been found orbiting this kind of star," said Michael Gillon, lead author of the paper and the principal investigator of the TRAPPIST exoplanet survey at the University of Liege, Belgium. "It is also the best target yet for studying the atmospheres of potentially habitable, Earth-size worlds."

The TRAPPIST-1 exoplanets are located so close to each other that looking up from one planet would likely allow a person to see the geological features of another. The planets are closer to their host star than Mercury is to our sun, but because the TRAPPIST-1 star is an ultra-cool dwarf, it is still possible that they would still have liquid surface water. The dwarf is also much smaller than our sun – if our sun were a basketball, the TRAPPIST-1 star would by comparison be about the size of a golf ball. At this time, the scientists are unable to say if any of the planets were able to retain their atmospheres – as ultra-cool dwarf stars are known to be very active when young, the star's activity could have eroded the atmospheres at some point in the past. However, the star is cool now, and if the planets were able to retain their atmospheres and surface water, they could potentially harbor life. The TRAPPIST-1 star is estimated to be at least half a billion years old. 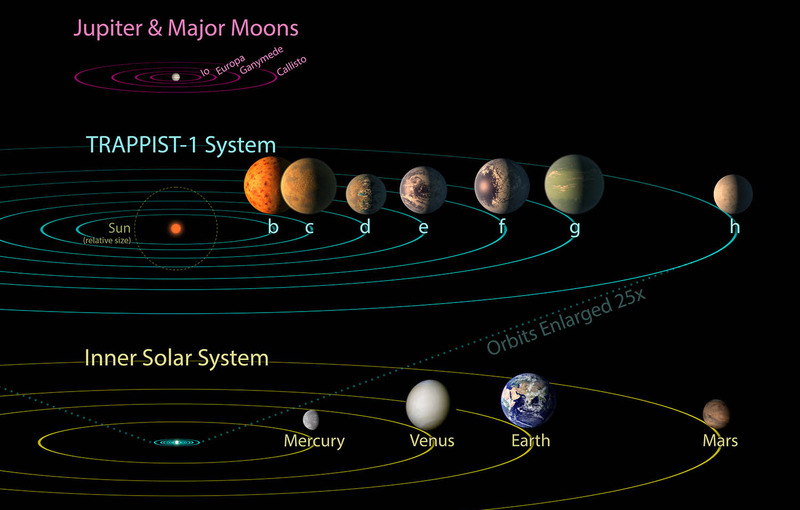 "This is the most exciting result I have seen in the 14 years of Spitzer operations," said Sean Carey, manager of NASA's Spitzer Science Center at Caltech/IPAC in Pasadena, California. "Spitzer will follow up in the fall to further refine our understanding of these planets so that the James Webb Space Telescope can follow up. More observations of the system are sure to reveal more secrets.”

NASA will use its James Webb Space Telescope, launching in 2018, for further research of the TRAPPIST-1 exoplanet system. Webb will enable the research team to detect chemical traces of water, oxygen, methane, and other chemicals, as well as analyze temperatures and surface pressures.

“This discovery could be a significant piece in the puzzle of finding habitable environments, places that are conducive to life,” said Thomas Zurbuchen, associate administrator of the agency’s Science Mission Directorate in Washington. “Answering the question ‘are we alone’ is a top science priority and finding so many planets like these for the first time in the habitable zone is a remarkable step forward toward that goal.”