In the hunt to find worlds similar to our own, researchers from Texas and Germany have used a statistical approach to infer that an Earth-like planet is residing in the habitable zone of GJ 832, a planetary system that is already known to harbour two planets at 0.16 and 3.53 astronomical units (AU) from its host star. This recent research places an additional planet orbiting between the inner and the outer planets, with a mass less than 15 Earth masses.

In recent years there has been substantial progress in the search for planets that, like our own, are capable of harbouring life and a number of candidates within the habitable zone (HZ) of their host stars have now been found. Quite often these planets are not alone and recent discoveries have shown that multi-planetary systems in compact orbits in the Milky Way Galaxy seem common – nearly 500 systems with three or more planets have been detected so far1.

Finding gas giants at close orbits to the central star is in itself a non-trivial task, but finding an Earth-size planet presents many additional technical challenges and it is for this reason, that researchers use other means than the traditional methods used (transit, direct imaging, gravitational lensing and radial velocity) to find these smaller counterparts.

Indeed, both of the two known planets in the GJ 832 system were detected by the radial velocity (RV) technique from which the orbital parameters were extracted by using the best-fit solutions. Discovered in 2014, the inner planet GJ 832c is thought most likely to be a rocky planet with a mass ≥ 5.4 Earth masses, which may be concealing a dense atmosphere. However, this latter feature, along with its close proximity to the star, have prompted researchers to suspect that the planet is not suitable for life. Located further out is a long-period (∼3657 days) giant planet known as GJ 832b. This outer planet has a mass of around 0.64 Jupiter masses, that is well outside the habitable zone. Due to its relative position and its mass, it has been likened to Jupiter in our own solar system and it is assumed to play the same role of setting gravitational equilibrium in the system. 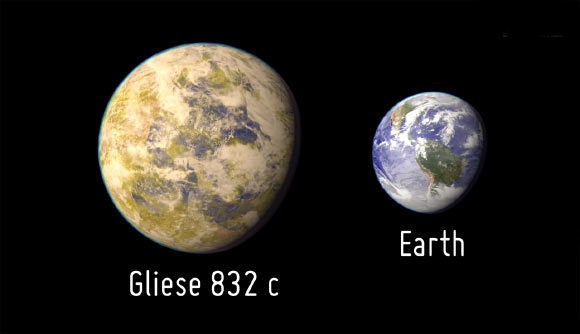 The central star in question is GJ 832, a main sequence red dwarf star (of a spectral type M1.5V) with a mass just less than half of that of our Sun, (0.45 Solar masses), located at a relatively close distance of 16.1 light years from the Earth in the southern constellation Grus.

The yet unnamed planet discovered by an international trio of astronomers whose lead author S. Satyal is based at the University of Texas, state in their research paper that the planet was found using numerical simulations from data obtained from GJ 832b and GJ 832c, and the approximate mass and distance from the star for the ‘new’ Earth-like planet were computed using the radial velocity (RV) signature of the Keplerian motion of the inner planet (GJ 832c).

Through their numerical simulations, the team state that the synthetic RV signal suggests that an additional planet (between 1 and 15 Earth masses) with a dynamically stable configuration may be residing between 0.25 - 2.0 AU from the star (just within the habitable zone) and that its upper mass limit is limited by the radial velocity signal for the known inner planet (2m/s).

In our Solar System, Mercury orbits the Sun at 0.39 AU and Jupiter at 5.2 AU and between them sit a further three planets. It is therefore plausible that the GJ 832 system is also hiding at least one additional Earth-size planet between the two that have been discovered so far. However, the team conclude that the anticipated RV signal is much lower than the sensitivity of current RV instruments, therefore other techniques such as the transit method or direct imaging are needed to confirm the existence of this newly discovered planet.

For further information on this research, please see http://arxiv.org/pdf/1604.04544.pdf