With planet hunting telescopes scouring the skies for exoworlds large and small, the next step in characterising them further will be to start looking at what type of molecules make-up their atmospheres - a development that is now underway as astronomers reveal the first detailed chemical "fingerprint" of a planet that is a cross between Earth and Neptune.

51 Pegasi b, the first exoplanet to be discovered orbiting a main-sequence star, marked a breakthrough in astronomical research when it was discovered nearly 24 years ago. Since then, thousands of exoworlds, big and small, have been found everywhere that astronomers look, including around the nearest star to us.

With numbers growing year after year, astronomers are keen to start ascertaining what these multitude of worlds beyond our Solar System are made of and a start has been made on Gliese 3470 b. First observed in 2013, this heavily-shrouded world has since been the subject of a new type of study that uses the combined multi-wavelength capabilities of NASA's Hubble snd Spitzer space telescopes to understand its chemical make-up.

Gliese 3470 b (also known as GJ 3470 b), is a sub-Neptune/Super-Earth hybrid exoplanet weighing in at 12.6 Earth masses. It is more massive than Earth, but less massive than Neptune, which is more than 17 Earth masses, and its has a large rocky core buried under a deep crushing hydrogen and helium atmosphere.

Neptune also has a rocky core, but unlike our icy gas giant that orbits three billion miles from the Sun, Gliese 3470 b may have formed very close to its red dwarf star as a dry, rocky object and piled on vast quantities of hydrogen and helium gas to build up a thick atmosphere as it swirled around the primordial disk of gas that it was born in.

"This is a big discovery from the planet formation perspective. The planet orbits very close to the star and is far less massive than Jupiter—318 times Earth's mass—but has managed to accrete the primordial hydrogen/helium atmosphere that is largely "unpolluted" by heavier elements," said Björn Benneke of the University of Montreal, Canada. "We don't have anything like this in the solar system, and that's what makes it striking."

Clues about the planet's nature and origin have been determined by astronomers using a method known as spectroscopy – the study of the absorption and emission of light and other radiation by matter. This works by studying the loss of light as Gliese 3470 b passes in front of its star (transit) and then behind it (eclipse). All totalled, the space telescopes observed 12 transit events and 20 eclipses - enough to distinguish what chemical compounds were rife on the planet.

"For the first time we have a spectroscopic signature of such a world," said Benneke. "We expected an atmosphere strongly enriched in heavier elements like oxygen and carbon which are forming abundant water vapour and methane gas, similar to what we see on Neptune,” said Benneke. "Instead, we found an atmosphere that is so poor in heavy elements that its composition resembles the hydrogen/helium rich composition of the Sun."

This combination of characteristics – its location, size and chemical make-up – has led Benneke and colleagues to surmise that the protoplanetary disk that Gliese 3470 b grew from dissipated before the planet could bulk up further, thus stopping the planet from accreting more gas and becoming a hot Jupiter. In essence, the planet got stuck being a sub-Neptune, said Benneke.

At the moment, clouds and hazes are somewhat of a nuisance for an astronomer wanting a thorough and detailed look at an exoplanet, as they limit the depth at which they can peer through the skies. With NASA's upcoming James Webb Space Telescope getting ready for launch though that should all change, as its unprecedented sensitivity in the infrared should enable researchers to peek further down through an atmosphere than ever before. 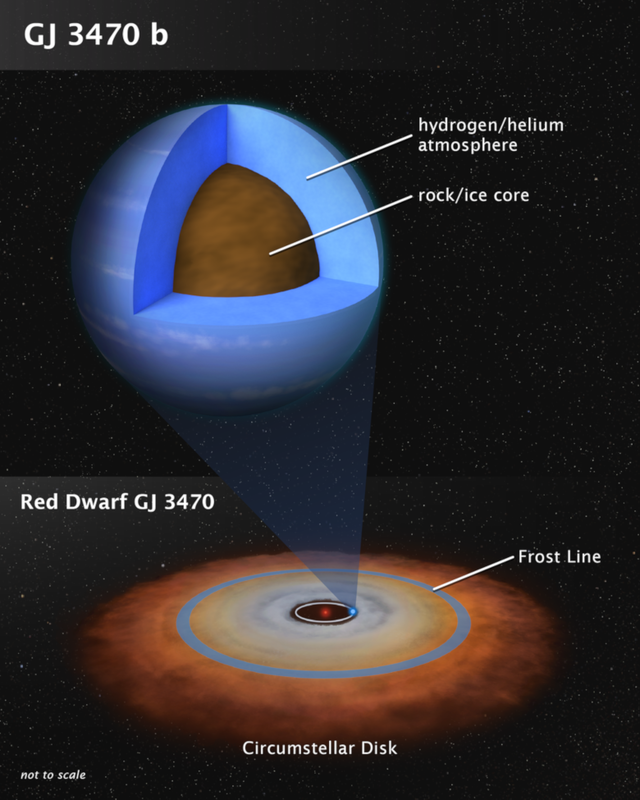 Unlike Neptune, which is 3 billion miles from the Sun, GJ 3470 b may have formed very close to its red dwarf star as a dry, rocky object. It then gravitationally pulled in hydrogen and helium gas from a circumstellar disk to build up a thick atmosphere. The disk dissipated many billions of years ago, and the planet stopped growing. The bottom illustration shows the disk as the system may have looked long ago. Observation by NASA's Hubble and Spitzer space telescopes have chemically analyzed the composition of GJ 3470 b's very clear and deep atmosphere, yielding clues to the planet's origin. Many planets of this mass exist in our galaxy.