Astronomers have discovered the most distant superluminous supernova ever detected – a rare type of supernova that ended its life in a huge cosmic explosion when the Universe was only a quarter of its current age.

Superluminous supernova, or SLSN for short, are the brightest and rarest class of supernovae and are thought to occur when the material that was flung-off in the initial blast falls back onto the dense stellar core that remains – a rapidly rotating neutron star. SLSNs were first discovered only 10 years ago and they are so luminous that they shine brighter than even the brightest galaxies.

The SLSN at the heart of this discovery is known as DES16C2nm and it was detected by the Dark Energy Survey (DES); an international collaboration of more than 400 scientists from over 25 institutions worldwide that began in 2013. DESt is set to map several hundred million galaxies over a five year period, in order to find out more about dark energy, the mysterious force believed to be causing the accelerated expansion of the Universe.

"It's thrilling to be part of the survey that has discovered the oldest known supernova. DES16C2nm is extremely distant, extremely bright, and extremely rare - not the sort of thing you stumble across every day as an astronomer,” said lead author of the study Dr Mathew Smith, of the University of Southampton. ”As well as being a very exciting discovery in its own right, the extreme distance of DES16C2nm gives us a unique insight into the nature of SLSN.”

Clues as to the temperature of the explosion and the amount of metal produced when the star exploded – two key aspects that drives these cosmic explosions – can be learned from the ultraviolet light emitted from SLSN - which in the case of DES16C2nm has taken 10.5 billion years to reach Earth. However more discoveries of this type of event are needed to gain a greater understanding of the population of SLSNs as a whole and given a large enough sample, scientists could then be able to 'standardise' them as they did with type 1a supernovae.

Type 1a supernovae are exploding white dwarf stars and are used in cosmology as typical "standard candles" for measuring the expansion of the Universe. Since SLSN can be anywhere from 50 to 100 times brighter than type 1a supernovae, they can be seen at even greater distances. This in theory could allow researchers to learn more about the nature of dark energy while probing even more deeply into the expansion history of the Universe.

Study co-author Bob Nichol, Professor of Astrophysics at the University of Portsmouth, commented: "Such supernovae were not thought of when we started DES over a decade ago. Such discoveries show the importance of empirical science; sometimes you just have to go out and look up to find something amazing." 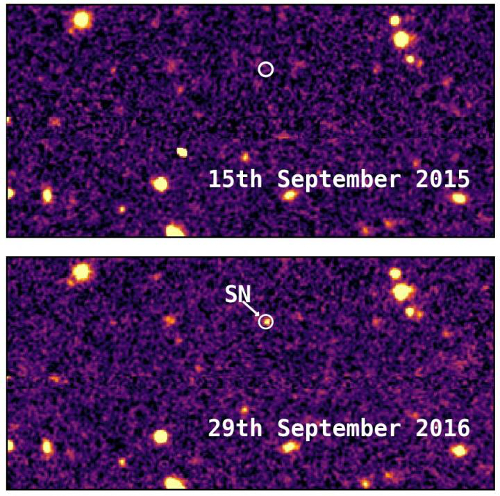 Before and after the supernova was detected. Image: M Smith and DES collaboration