Just as NASA gets ready to send its Mars 2020, Perseverance rover to the Red Planet tomorrow, ESA’s long term martian resident, the ExoMars Trace Gas Orbiter (TGO), has spotted puzzling new gas signatures which could help in solving the methane mystery on Mars.

Launched in 2016 with the landing Demonstrator Module known as Schiaparelli, the European Space Agency’s TGO has been searching for evidence of methane (CH4) and other trace atmospheric gases that could be signatures of active biological or geological processes.

The fascination with finding methane lies in the fact that more than 90 percent of the carbon-hydrogen molecule on Earth is produced by living organisms. Finding bursts of it on another planet is therefore a tantalising sign that life could be present.

However, methane can also be produced abiotically, for example, by the oxidation of iron, similar to what occurs in terrestrial hot springs, or in active volcanoes.

Consequently, for a planet beyond our own, the challenge lies in determining how methane is generated.

If that wasn’t difficult enough, methane observations on Mars are notoriously ambiguous. Last year NASA’s Curiosity rover reported the highest burst of methane recorded yet, but neither ESA’s Mars Express nor the TGO recorded any signs of the elusive gas, despite flying over the same location at a similar time.

Because methane also doesn’t stick around – the molecule has a chemical lifetime of about 300 - 600 years before it is broken down by the Sun’s radiation, which is very short on geological time scales – all that can be determined about a detection is that the gas was released into the atmosphere recently, even if the molecule itself was generated billions of years ago.

These discrepant observations though could soon be reconciled as the TGO spacecraft has now spotted never-before-seen signatures of ozone (O3) and carbon dioxide (CO2); features that are both "puzzling and surprising" says Kevin Olsen of the University of Oxford, UK, who helped find the new gas signals.

CO2 and ozone are not new to Mars; ozone forms a layer in the upper atmosphere and over 95 percent of the martian atmosphere is made up of CO2.

What differs about these new observations by the TGO is where on the electromagnetic spectrum they were found. “They lie over the exact wavelength range where we expected to see the strongest signs of methane,” says Olsen.

Discovering an unforeseen CO2 signature that has never before been observed in a laboratory, and where scientists hunt for methane "is significant,” says Alexander Trokhimovskiy of the Space Research Institute of the Russian Academy of Sciences in Moscow, Russia, who separately to Olsen, recently published his findings in the Astronomy & Astrophysics research journal.

“This signature could not be accounted for before, and may therefore have played a role in detections of small amounts of methane at Mars,” he adds.

Similarly, observing ozone in the range where TGO hunts for methane is another wholly unanticipated result.

Scientists have been tracking ozone at high altitudes over 20 kilometres above the surface, using the gases light signature (its spectra) which appears in the ultraviolet portion of the electromagnetic spectrum.

The new results, taken by the sensitive Atmospheric Chemistry Suite (ACS) instrument on TGO, shows that it is now also possible to map martian ozone in the infrared. “This is the first time ozone on Mars has been identified in this part of the infrared wavelength range,” adds Olsen.

This means its behaviour can be probed at lower altitudes allowing scientists to build a more detailed view of ozone’s role in the planet’s climate.

“Ozone and CO2 are important in Mars’ atmosphere. By not accounting for these gases properly, we run the risk of mischaracterising the phenomena or properties we see,” says Trokhimovskiy.

The observations analysed by the two different teams were mostly performed at different times to NASA’s Curiosity rover, but there is no direct disagreement between missions as the TGO data cannot account for large plumes of methane, only smaller amounts.

“In fact, we’re actively working on coordinating measurements with other missions,” clarifies Kevin. “Rather than disputing any previous claims, this finding is a motivator for all teams to look closer – the more we know, the more deeply and accurately we can explore Mars’ atmosphere.” 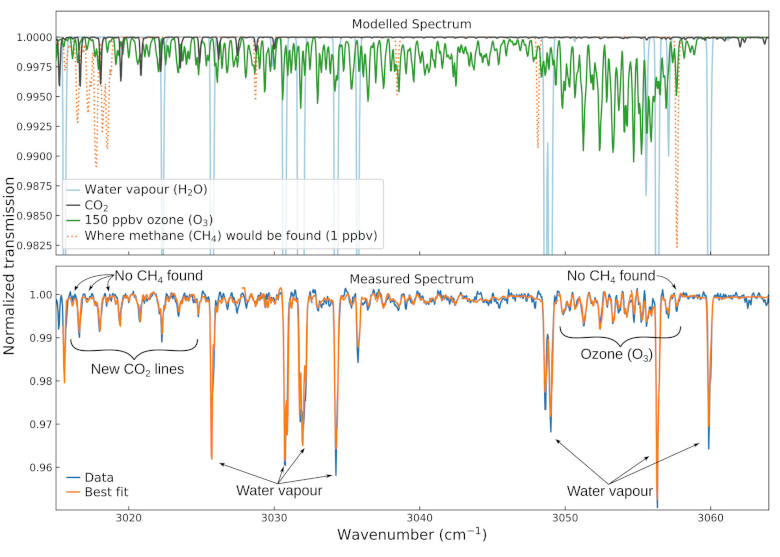 This graph shows an example of the measurements made by the Atmospheric Chemistry Suite (ACS) MIR instrument on ESA's ExoMars Trace Gas Orbiter (TGO), featuring the spectral signatures of carbon dioxide (CO2) and ozone (O3). The bottom panel shows the data (blue) and a best-fit model (orange). The top panel shows the modelled contributions from a variety of different gases for this spectral range. The deepest lines come from water vapour (light blue). The strongest O3 feature (green) is on the right, and distinct CO2 lines (grey) appear on the left. The locations of strong methane features (orange) are also shown in the modelled contributions, though methane is not observed in the TGO data. Image: ESA