If you are lucky enough to live in the U.S. West Coast, Alaska and Hawaii and if the skies are clear, then you will be treated to the best view of a rare super blue blood moon event, that will take place early tomorrow morning (Wednesday 31st January).

This occurs when three celestial events – a supermoon, a blue moon and a lunar eclipse – all happen at the same time. A supermoon occurs when the Moon is closer to Earth in its orbit and appears about 14 percent brighter than usual. As the second full moon of the month, this moon is also commonly known as a blue moon, though it will not be blue in appearance. The super blue moon will take on a reddish tint as it passes through Earth’s shadow, giving it the name blood moon. Put together you have a a rare super blue blood moon.

A total lunar eclipse occurs when the Sun, Earth, and a full moon form a near-perfect lineup in space. The total phase of the eclipse will last 1 hour and 16 minutes and the whole process will take more than four hours.

Weather permitting, the West Coast, Alaska and Hawaii will have a spectacular view of totality from start to finish, however, eclipse viewing will be more challenging in the Eastern time zone. if you live in the East (U.S), the best opportunity is to head outside about 6:45 a.m. and get to a high place to watch the start of the eclipse.

Similarly for Canada, a clear view will be limited as the Moon sets and the Sun rises during the early stages of the eclipse. For those in the Middle East, Asia, eastern Russia, Australia and New Zealand, the super blue blood moon can be seen during moonrise in the evening of the 31st.

NASA Television and the agency’s website will provide live coverage of the celestial spectacle beginning at 5:30 a.m. EST if the weather is favourable. If you miss the 31st January lunar eclipse, then you’ll have to wait almost another year for the next opportunity in North America. Although this event will be a supermoon, it won’t be a blue moon. 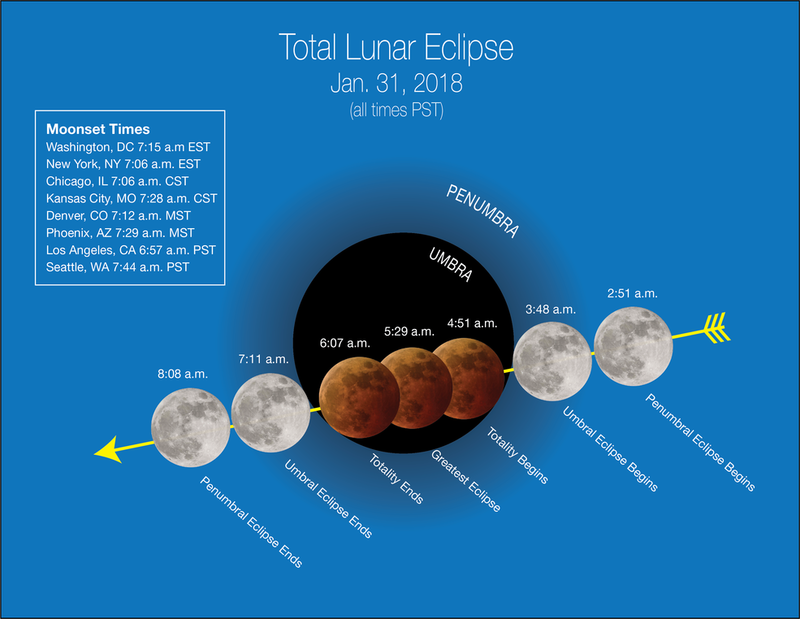