Using the positions of supermassive black holes, astronomers have created a precise map of the expansion of the Universe over the last 10 billion years.

The map, created by an international collaboration of scientists using the Sloan Digital Sky Survey (SDSS), not only reveals the large-scale structure of the Universe, but it could also help improve our understanding of dark energy – the mysterious force that dominates the Universe and causes the Universe's expansion to speed up.

To make the map, the team used measurements of a phenomena known as baryon acoustic oscillations (BAO), which are regular, periodic fluctuations in the density of the visible baryonic matter (normal matter such as protons and electrons) of the Universe.

These oscillations are analogous to sound waves created in air by pressure differences and when the Universe was 380,000 years old, conditions changed suddenly and the oscillations became 'frozen' in place. Consequently, these ‘frozen’ waves left behind an imprint which can be seen in the three-dimensional structure of the Universe we see today.

However the signals need to be correlated with something so that the oscillations can be measured and used as a ‘standard ruler’ for length scale in cosmology. For this, quasars powered by supermassive black holes at the centres of galaxies were used as they appear as a very bright point source in the distant past.

Quasars were a lot more common when the Universe was much younger and studies have revealed that the peak epoch of quasar activity occurred approximately 10 billion years ago. Thus, by looking at the positions and redshifts of more than 147,000 quasars, distributed over 2044 square degrees of the sky, the team were able to correlate BAO signals with overdense regions in the early Universe to show how it has evolved with time.

"Even though we understand how gravity works, we still do not understand everything - there is still the question of what exactly Dark Energy is. We would like to understand Dark Energy further. Not with alternative facts, but with the scientific truth, and surveys such as eBOSS are helping us to build up our understanding of the universe,” said Will Percival, Professor of Cosmology at the University of Portsmouth, who is the eBOSS survey scientist. EBOSS is an acronym for the extended Baryon Oscillation Spectroscopic Survey (eBOSS) from which the quasars were analysed.

By showing that the BAO signals and quasars are consistent with expectations of basic large-scale structure predictions, the results also help confirm the standard model of cosmology which assumes that Einstein's General Theory of Relativity is the correct theory of gravity on cosmological scales. It also means the the Universe is considered to have a flat geometry meaning the Universe could extend forever.

There is still work to be done however, and the eBOSS experiment continues using the Sloan Telescope in order to observe even more quasars and therefore increase the size of any future maps.

Soon, a new generation of sky surveys that will increase the fidelity of the maps by a factor of ten compared with eBOSS will begin as the Dark Energy Spectroscopic Instrument (DESI) and the European Space Agency Euclid satellite mission get underway to reveal the Universe and dark energy in never-seen-before detail. 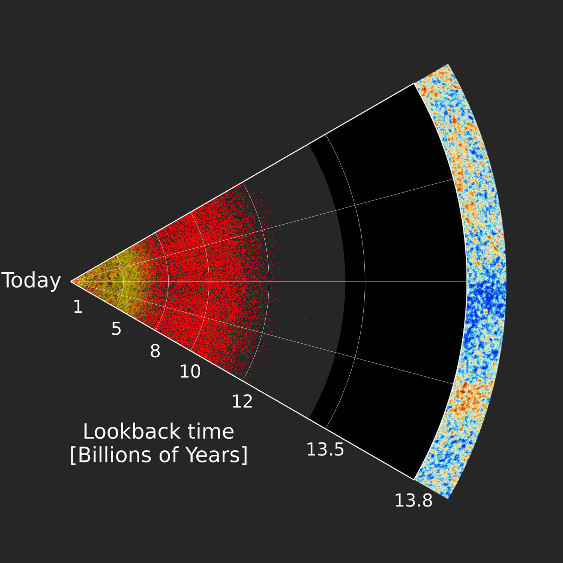 Largest-ever three-dimensional map of the universe. Earth is at the left, and distances to galaxies and quasars are labelled by the lookback time to the objects (lookback time means how long the light from an object has been travelling to reach us here on Earth). The locations of quasars (galaxies with supermassive black holes) are shown by the red dots, and nearer galaxies mapped by SDSS are also shown (yellow). The right hand edge of the map is the limit of the observable universe, from which we see the Cosmic Microwave Background (CMB) - the light “left over” from the Big Bang. Fluctuations in the CMB as observed by the recent ESA Planck satellite mission are shown. The bulk of the empty space in between the quasars and the edge of the observable universe are from the “dark ages”, prior to the formation of most stars, galaxies, or quasars. Image: Anand Raichoor and the SDSS Collaboration.