With the discover of systems such as TRAPPIST-1 and Kepler-90, it has become clear that planetary systems are as diverse as the planets that inhabit them. Hoping to uncover just how varied the birthplace of multi-planet systems are is SPHERE and recent images show that like the planets themselves, no one disc is alike.

Installed on ESO’s Very Large Telescope (VLT), SPHERE or the Spectro-Polarimetric High-contrast Exoplanet REsearch instrument is mainly tasked with detecting and studying new giant exoplanets orbiting nearby stars. However, the state-of-the-art adaptive optics system that has been incorporated into the instrument makes SPHERE an ideal device in which to photograph the dusty nurseries which foster the growth of planetary systems.

Taking a photograph (or a direct image as it is referred to) of a dusty disc around a young star is incredibly difficult to do, as the light from the evolving protostar masks the presence of any planets that have started to form. Rather handily, SPHERE is equipped with a coronagraph, and this blocks out the central region of the star allowing the rest of the disc to be imaged without starlight swamping the picture.

SPHERE’s capabilities have recently been tested with the DARTTS-S (Discs ARound T Tauri Stars with SPHERE) survey, and the new images have revealed a zoo of different discs that range in shapes, sizes and structures around these young (less than 10 million years old), variable stars.

One particularly oddity that has been been highlighted from the recent sample is the edge-on disc around the star GSC 07396-00759. This central red star is a member of a multiple star system but, bizarrely, this fledgling disc appears to be more evolved than the gas-rich disc around another T Tauri star in the same system, even though they are the same age. Why the evolutionary timescales of these two discs is different (given the circumstances) is not yet clear.

SPHERE is also helping astronomers to understand never seen before features in a debris disc surrounding a nearby and young M star (AU Mic), which has a series of large-scale arch-like structures moving outwards at high velocities.

Like the chronological conundrum before it, the exact origin of these features are still under question. Astronomers are hoping therefore that along with these anomalies and other characteristics belonging to transition discs – sites that are considered to be undergoing planet production – SPHERE will revolutionise our understanding of the environments around young stars and the complex mechanisms of planetary formation. 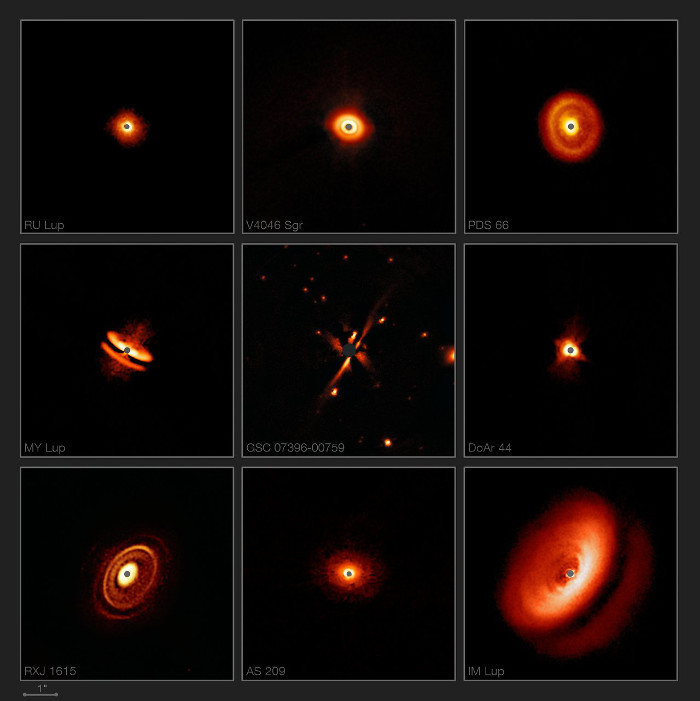 New images from SHPERE show a bizarre variety of shapes, sizes and structures, including the likely effects of planets still in the process of forming. Image: ESO/H. Avenhaus et al./E. Sissa et al./DARTT-S and SHINE collaborations.