After over a decade in space, Rosetta prepares for final impact with the 67P/Churyumov-Gerasimenko comet on Friday, September 30.
According to the ESA Rosetta blog, "Rosetta will collect science data until the very end of its descent. The opportunity to study a comet at such close proximity makes the descent phase one of the most exciting of the entire mission." Rosetta's impact with the comet is scheduled for 1040GMT on September 30th. Roughly 40 minutes later the end of the mission will be confirmed, as it takes 40 minutes for Rosetta's signal to reach Earth. 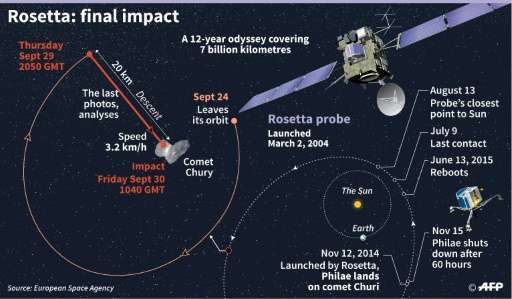 Rosetta, along with the Philae lander probe, were launched in March 2004, and have traveled over six billion kilometers before reaching the comet in 2014. Philae landed on the comet's surface in November 2014.
The 67P/Churyumov-Gerasimenko comet is beginning to move further away from the Sun, making it more difficult for Rosetta's solar panels to recharge, and a decision was made by mission control to attempt taking measurements from closer to the comet than would have been considered safe under regular operating conditions – before allowing Rosetta to crash.
"We hope to look at structures on the walls of the pits which may date to the time of the comet's formation”, said Philae scientist Jean-Pierre Bibring. Rosetta will also take new measurements of 67P's gas density, surface temperature and gravity field. 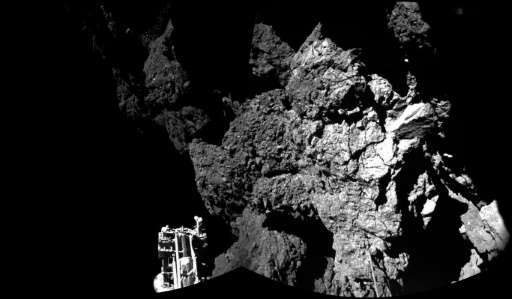 This November 2014 shows an image taken by Rosetta's lander Philae on the surface of Comet 67P/Churyumov-Gerasimenko. Credit: ESA

The closest Rosetta had ever been to the surface was about 1.9 km—now it will get to take pictures within tens of metres and send them home until just before impact.

"After Rosetta has touched down, it will not be possible to collect or return any additional data," the ESA said. "The unique measurements obtained during this final descent will be a fitting closing chapter to Rosetta's time spent living with this comet."