Scientists prove the Moon was created by a vaporised Earth

Measurements of the different types of potassium found in both Earth and Moon rocks have finally allowed scientists to confirm how the Moon was made.

Most researchers agree that the Moon was formed when a body of considerable size hit or grazed the Earth and the left over debris coalesced together to create the Moon. The giant impact theory became the leading hypothesis for the Moon's origin as it helped to explain a number of aspects, such as the large size of the Moon relative to the Earth and the rotation rates of the Earth and Moon.

However in 2001, a revelation occurred as Moon rock samples brought back from the Apollo missions in the 1970s were found to contain nearly identical isotopic compositions when compared to terrestrial rocks. This proved to be somewhat of a stumbling block, as simulations of the suspected impact predicted that most of the material (60-80 percent) that eventually formed the Moon would came from the impacting body and not from Earth. The probability that the impactor just happened to have the same isotopic signature as the Earth was very remote, as planetary bodies that formed in different parts of the solar system generally have different isotopic compositions.

"So people decided to change the giant impact hypothesis," said Kun Wang, assistant professor in Earth and Planetary Sciences at Washington University in St. Louis, and one of the two scientists to have led the research on this new discovery. "The goal was to find a way to make the Moon mostly from the Earth rather than mostly from the impactor. There are many new models – everyone is trying to come up with one – but two have been very influential."

The two models Wan discusses are one whereby a low-energy impact leaves the proto-Earth and Moon cocooned in a silicate atmosphere and the other involves a much more violent impact. This first scenario however is also problematic, as exchanging material through an atmosphere is a very slow process and would not leave enough time for the material to mix thoroughly before it started to fall back to Earth.

In the second scenario the collision between the two bodies results in the vaporisation of both the impactor and most of the proto-Earth, which subsequently expands to form an enormous superfluid disk from which the Moon eventually crystallises. This theory is more favoured as the dense melt/vapour atmosphere created from the impactor and Earth's mantle would allow for thorough mixing of the material and result in the identical isotope composition of the Earth and Moon.

Nonetheless, being able to distinguish the tiny differences in the isotopes of the Earth and Moon rocks, in this case potassium isotopes, has been limited by current analytical capabilities. The challenge to improve methods was taken up by Wang and colleague Stein Jacobsen, a professor of geochemistry at Harvard University who have developed a technique that significantly improves – with precisions 10 times better than the best previous method – how isotopes such as these are analysed.

Their work has resulted in the first experimental evidence that can discriminate between the two leading models for the Moon's origin. "Our results provide the first hard evidence that the impact really did (largely) vaporise Earth," said Wang and the evidence that has given the game away is the amount of heavy potassium isotopes found in lunar samples.

The duo’s findings show that Moon rocks are enriched in the isotope compared with Earth rocks and is due to incomplete condensation of the potassium from the vapour phase during the Moon's formation. This scenario disfavours the silicate atmosphere model, which predicts lunar rocks will contain less of the heavier isotope than terrestrial rocks, the opposite of what Wang and Jacobsen have found. 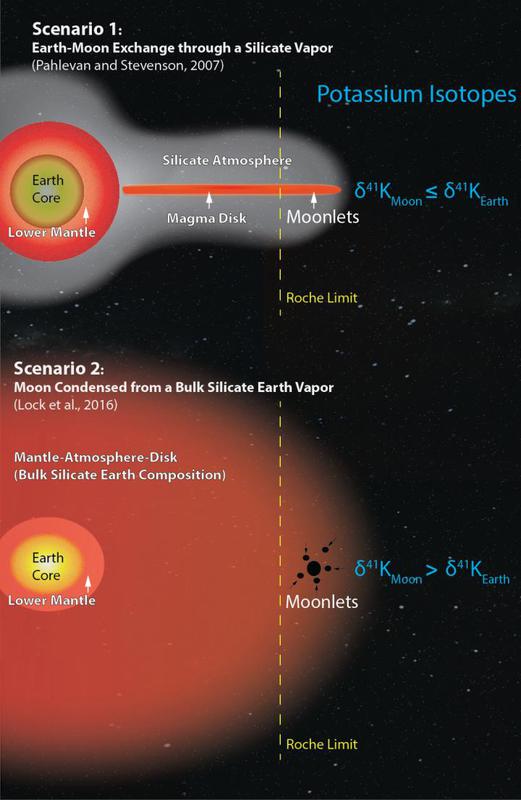 Two recent models for the formation of the moon, one that allows exchange through a silicate atmosphere (top), and another that creates a more thoroughly mixed sphere of a supercritical fluid (bottom), lead to different predictions for potassium isotope ratios in lunar and terrestrial rocks (right).