A Russian State Commission is investigating the mishap yesterday (11 October) of a Soyuz FG booster and it is not yet clear what impact the abort might have on upcoming crewed flights to the International Space Station (ISS).

A Progress supply ship is scheduled for launch at the end of the month and the Station’s current crew - Expedition 57 commander Alexander Gerst, Serena Auñón-Chancellor and Soyuz MS-09 commander Sergey Prokopyev - is scheduled to return to Earth on 13 December but may now have to stay longer.

Soyuz MS-11 commander Oleg Kononenko, Canadian astronaut David Saint-Jacques and NASA astronaut Anne McClain are scheduled for launch from Baikonur on 20 December but it’s not yet known whether the failure investigation will be complete by then or even which crew (Ovchinin’s or Kononenko’s) will be on board.

In the near term, two spacewalks planned by Hague and Gerst on 19 and 25 October to replace a set of batteries in the Space Station’s solar power system will be deferred but two upcoming US supply ships are expected to launch on schedule in November.

The booster rocket carrying a Soyuz spacecraft with a Russian and a US astronaut onboard and heading to the ISS, failed in mid-air some two minutes after launch forcing the crew to make an emergency landing.

The rocket was carrying US astronaut Nick Hague and Russian cosmonaut Alexei Ovchinin. Footage from inside the Soyuz showed the two men being shaken around at the moment the failure occurred, with their arms and legs flailing.

Roscosmos, the Russian federal space agency) launched its Soyuz MS-10 crew vehicle from Baikonur at 1440 local time. Everything appeared normal in its early stages as the rocket climbed away. Among the onlookers at the launch site was NASA administrator Jim Bridenstine.

Live television views from inside the crew module showed Ovchinin and Hague calmly monitoring cockpit displays as they were pushed back into their seats by the steady acceleration. The flight was proceeding normally under the power of its second stage core booster when the mishap occurred.

The Russians routinely practice ascent abort procedures and the Soyuz is equipped with multiple systems to assure a safe landing at virtually any point during the climb to space.

It was the first mishap for a Russian Soyuz booster since an earlier version of the rocket caught fire on the pad before launch in August 1983, triggering a dramatic abort as the crewed capsule was pulled away from the exploding rocket.

He rejected suggestions it could harm US relations, saying they recognised it was a "hi-tech industry linked to risk". But he added: "We certainly won't conceal the reasons, it is uncommon for such situations".

NASA has been paying for seats on Soyuz rockets to ferry its astronauts to the ISS since the Space Shuttle programme ended in 2011 and space co-operation is an area which has survived otherwise tense political relations between Russia and the US. 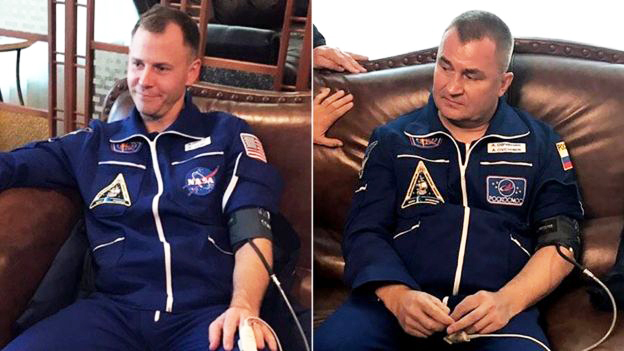