Investigations into an air leak in a Soyuz return spacecraft docked to the International Space Station (ISS) have been stepped up as it was revealed this week that the hole was most likely a result of human error rather than a micro-meteorite impact.

Dmitry Rogozin, head of the Roscosmos space agency told Russian media he was not ruling anything out, saying the hole was drilled “by a human hand” which could have happened on the ground before launch. He also speculated that it could have occurred after the spacecraft reached orbit on 6 June 2018.

In an English-language report posted by the TASS news agency late on Monday, Rogozin - known for his often controversial comments and tweets - said the agency was “considering all the theories”, though in the case of the latter he did not address why an astronaut or cosmonaut might do such a thing given the obvious danger to the Space Station and its crew.

“The theory one about a meteorite impact has been rejected because the spaceship’s hull was evidently impacted from inside,” he stated.

The ISS crew - which comprises two Russian cosmonauts, three NASA astronauts and an ESA German astronaut - used tape to seal the leak after it caused a small loss of pressure that was not life-threatening.

Initially it was announced that the hole in the side of the ship, which is used to ferry astronauts to and from orbit, was most likely caused from the outside by a tiny meteorite. NASA issued photos of the so-called ‘impact’ but after detailed analysis Roscomos admitted that an external impact had been ruled out.

Apart from releasing a series of photos NASA has not commented, referring all questions to the Russian space agency which is overseeing the investigation.

Alexander Zheleznyakov, a former space industry engineer and author, told the TASS state news agency that drilling the hole in zero gravity would be nearly impossible in that part of the spacecraft.

“Why would cosmonauts do it?” he asked. The hole is in a section of the Soyuz ship that is discarded in orbit and not used to carry people back to Earth.

It seems more likely the spacecraft was damaged during testing at Baikonur cosmodrome in Kazakhstan after passing initial checks and the mistake then hastily covered up. “Someone messed up and then got scared and sealed up the hole,” one space industry source speculated, but when the Soyuz reached the ISS the sealant “dried up and fell off”.

Energiya, which builds the Soyuz spacecraft, will carry out checks for possible defects on all Soyuz ships and Progress unmanned ships used for cargo at its production sites outside Moscow and at Baikonur.

The leak was discovered last Wednesday (29 August) evening when sensors aboard the ISS detected a slow loss of cabin air pressure. It was not deemed serious enough to wake the crew but the next morning it was traced the leak to the upper module of the Soyuz MS-09 spacecraft docked to the Russian Rassvet module.

Photographs of the hole in the Soyuz’s upper habitation module showed what appeared to be a drill hole in an interior panel with several nearby gouges, like those that would be caused by a drill skipping across a surface before digging in.

Some Russian media accounts have speculated a technician mistakenly drilled the hole during pre-flight processing and then attempted to cover up the mistake by applying a sealant of some sort. After two months in orbit, the sealant could have dried out and been expelled by cabin air pressure, causing the leak. 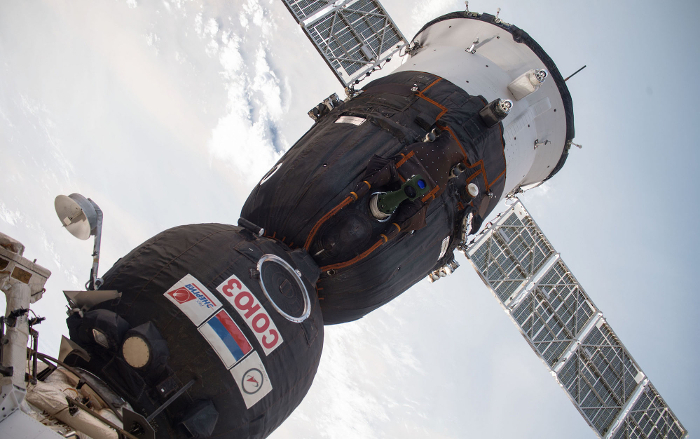 The Soyuz MS-09 spacecraft docked to the ISS. Image: NASA