The ISS was passing 250 miles above southern Cameroon at the time of liftoff. According to flight plan, Soyuz will reach the ISS at 4:12 GMT on Saturday, July 9th. 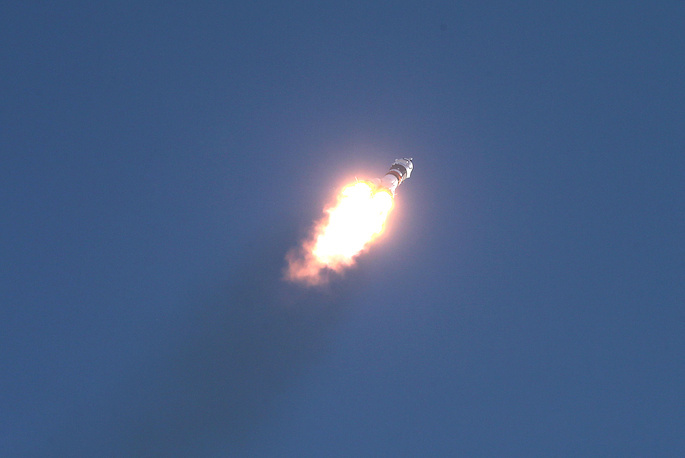 In recent years, Soyuz crew vehicles have followed a four-orbit rendezvous sequence, docking at the ISS about six hours after launch. This time, however, the crew will follow the traditional 34-hour rendezvous, so that the Russian engineers have a chance to check the vehicle's upgraded systems in more detail. These upgrades include changes to the craft's maneuvering system and new communications gear that allows voice and data to be relayed from the ground over 70% of the orbit through Russian satellites. Earlier series of spacecraft could only send or receive commands when passing over Russian ground stations. The MS-01 also has an improved docking mechanism, better micrometeoroid shielding and solar arrays, an extra set of batteries and a reusable “black box” that records and stores various data.

The crew will be welcomed by Expedition 48 commander Jeffrey Williams, Soyuz TMA-20M commander Alexey Ovchinin and flight engineer Oleg Skripochka, who have been on the ISS since March. Expedition 47 (Timothy Kopra, Yuri Malenchenko and Timothy Peake) left the ISS on June 18.

“We’re very lucky, we have a very busy mission,” said Rubins. “That’s actually a wonderful thing for astronauts and cosmonauts. We have many visiting vehicles that are arriving, we made do some EVAs and we have a huge research complement of some incredibly interesting experiments on board station. There’s often a distinction between operations and research that’s made on the ground. But I actually think that anything that we’re doing on board space station, any operation we do, is actually … a giant research experiment to understand how human beings live in space.”

Ivanishin, Onishi and Rubins will remain on the ISS for the remainder of Expedition 48, and then transfer to Expedition 49. They are expected to leave the ISS in November 2016.